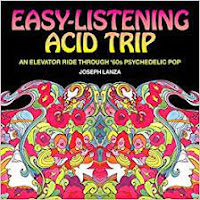 Whether you like it or not, easy-listening music can be fairly considered the soundtrack of life for Americans who grew up in the sixties and seventies. As soon as you left the house, it was everywhere: in the mall, grocery stores, department stores, five-and-tens (remember those?), restaurants, the doctor’s office and in the one place that earned the music – or Muzak – its often-derogatory name, the elevator.

Suburban parents even spun such “background music” at home, a habit that was popular among the better-off in the fifties with what is now regarded as “bachelor pad” or “lounge” music. Back in the seventies, I had relatives likely living well beyond their means who played these easy records day and night; it was a sign of class, sophistication and good taste to a certain generation.

American listeners could skip the light fandango to the orchestras of Ray Conniff, TV star Jackie Gleason, Andre Kostelanetz, 101 Strings, Mantovani, Mystic Moods Orchestra, Lawrence Welk (another TV star), Enoch Light and the Light Brigade and Ferrante & Teicher. The best of this bunch were easily the records of Henry Mancini, who was churning out many memorable film scores at the same time, and Percy Faith.

But America had no special claim on easy listening. Indeed, the music was even more popular in other countries. The soft parade marched through the British orchestras of Frank Chacksfield, Ronnie Aldrich and Cyril Stapelton. France gave us Francis Lai, another renowned film composer, Paul Mauriat and Franck Pourcel. But it was Germany that surely produced the two greatest practitioners of the art of easy with Bert Kaempfert and James Last.

To some, such orchestras spun silk out of the classics, Tin Pan Alley, Broadway numbers and film themes. For others, it turned good music to aural mush. In either case, these mood maestros smoothed whatever edges popular music possessed and spread a kind of hush over any memorable melody.

With the influx of rock and roll in the early sixties, prompted, of course, by the rise of the Beatles, popular and profitable tastes began to change. All of a sudden, orchestra leaders heard what was “happening” and hipped up quick.

Once everyone from Dylan and Donovan to the Stones and the Beach Boys started steering things down trippier roads, the easy fellows were close behind, ready to make bread out of the electrical banana.

This is where Easy-Listening Acid Trip: An Elevator Ride Through ‘60s Psychedelic Pop (Feral House), Joseph Lanza’s intoxicating journey through the mellow yellow of, well, “Mellow Yellow” and other strange trips, begins. 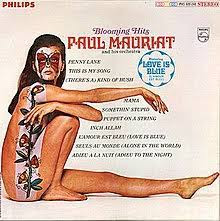 Lanza emerged as a specialist in easy-listening music during the last decade of the previous century when forgotten fifties easy favorites from the likes of Esquivel, Les Baxter, Martin Denny and so many others were repackaged and repurposed as mad-mod “space age,” “exotica” and “bachelor pad” music.

He wrote enthusiastic notes for CD compilations of mood makers like Ferrante & Teicher, Nelson Riddle, John Barry (who he calls a “master of moods”), Gunther Kalman Choir and Andy Williams’s wife, Claudine Longet while supervising easy compilations of his own for Time Life Music. One of those sets, Spirit of the ‘60s: Pop Troubadours (2000), a collection of songs by the Byrds, the Mamas and the Papas and Donovan, of course, tiptoes through these tulips.

Lanza also authored the well-regarded, yet little-known Elevator Music: A Surreal History of Muzak, Easy-Listening, and Other Moodsong (2004). That book earned plaudits from no less authorities than author J.G. Ballard, composer Wendy Carlos and documentarian Errol Morris, who hailed Elevator Music as “the definitive history of twentieth century music.”

It was in Elevator Music where Lanza turned cartwheels ‘cross the floor for what he called “metarock,” the art of reinterpreting rock songs into dreamlike, string-laden, easy-listening alternatives.

That is the seed that flowered into the fascinating and engaging Easy-Listening Acid Trip. Joesph Lanza looks back at the major psychedelic pop and rock hits that emerged during the fluorescent fever dream of the mid to late sixties, then considers the magical mystery makeovers of those songs the mood maestros offered up.

While Lanza has always been especially adroit with words, particularly in describing the mood or a feeling a song or a cover means to evoke, he’s at his very best in this battle of the batons. The number of thoughtful ruminations and clever turns of phrase Lanza offers on nearly every page make this book a true page turner.

Consider this Hair-raising consideration: “the ‘hippie musical’ ended up at the split-end of a counter-cultural mindset that had been growing for years.” Before you exhort a chuckle or a groan, you realize the clever wordplay makes perfect sense.

“Easy Listening,” writes Lanza, is “a musical terrain that has been ignored or belittled for so long that reappraising it often calls for aesthetic refocusing or perceptual cleansing.” Lanza not only has a gift for reappraisal but a flair for refocusing listeners’ attention on the marvel of good songcraft and even expert “softcraft.”

Deeply thoughtful and particularly well informed, Lanza effortlessly places the music in its historic context, noting not only the origin of a lyric but what else was “happening” in the world outside the song. He approaches his subject as an academic but reports on it with the love, respect and joy only a fan can bring to the music.

Lanza’s key insight in Easy-Listening Acid Trip is that for all the scary new-thing bluster that psychedelic pop initially proposed, much of it was often inspired or informed by the easy-listening music of the past, from the vaudeville, American Tin Pan Alley and British Musical Hall traditions. That, in turn, made songs like “Mr. Tambourine Man,” “San Francisco (Be Sure to Wear Flowers in Your Hair)” and “Penny Lane” so easy – and appropropriate – to easy-fy.

Lavishly illustrated in Milton Glaser-styled swirls and pop art sign posts, E-LAT also features a good number of the covers of those records discussed in the book, including such favorites as Paul Mauriat’s painted lady on Blooming Hits (one of the first record covers I ever saw), Billy Vaughn’s sci-fi scape on The Windmills of Your Mind and the Johnny Arthey Orchestra’s oddly wicked-looking Donovan kaleidoscope on The Golden Songs of Donovan. 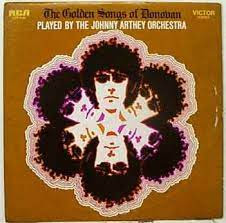 The book deserves an equally colorful soundtrack. I lost count of the number of times I went online to check out the easy variations Lanza discusses so vividly – and often right on point. (I was also enticed to track down several long out-of-print LPs Lanza reviews that more than piqued my curiosity, including the Alan Lorber Orchestra’s delirious 1967 Verve record The Lotus Palace, which features Colin Walcott and Vinnie Bell and was surprisingly reissued on vinyl not too long ago by Modern Harmonic.)

While Lanza makes a compelling case that “Easy-Listening should not be confused with lazy playing,” he doesn’t make much of how easily many of these tunes seeped into the jazz repertoire. Jazz players like Bud Shank, Kai Winding, Woody Herman and George Shearing were all busy taking acid trips of their own at the time, much to derision of fans and critics alike. Indeed, Count Basie and Sarah Vaughan devoted full albums to the Beatles.

Surprisingly, though, the Hungarian jazz guitarist Gabor Szabo gets some Lanzafaction for the “breezier elevator ride” of his 1967 album Wind Sky and Diamonds. Lanza reflects and refracts on the album’s genuine jazz-lite takes of “Lucy in the Sky with Diamonds,” “A Day in the Life” and “White Rabbit,” of which he writes so marvelously:

”Gabor Szabo, on Wind, Sky, and Diamonds, harnessed the wonky proportions of Jefferson Airplane’s “White Rabbit” with [Bill Plummer’s] sitar accompaniment. This time, his California Dreamers chime a wordless chorus. Grace Slick’s defiant anthem, favoring hipper pills over mother’s little helpers, was not the most inviting to elevator-ready adaptations, but Szabo draws on the song’s bit of Ravel’s Bolero and other influences, while the sitar opening seduces listeners to fall deeper into the rabbit hole’s escalating rhythm."

This is a fine example of the wit and wisdom Lanza brings to the party; it’s all that a high is supposed to be with none of the hangover such excess often brings. While the focus on this one Szabo album is as far into jazz Lanza is willing to go, I can’t help but wish he waxed as poetically on Light My Fire, another of Szabo’s “easy-listening jazz-id trips” with Bob Thiele and the New Happy Times Orchestra.

Sometime in the mid-seventies it seemed like easy-listening music just disappeared. The records vanished from the record stores’ shelves while the malls, stores and offices began playing the whispery soft-rock hits of the day and mellow anthems that used to get covered by the orchestras of yore.

Lanza chalks it up to younger editors deleting the “uncool” easy-listening charts from the magazines, while insisting easy-listening continued to sell well. I’m not so sure. Tastes changed – again – and when all is said and done, how much easier can you make a song like “How Deep is Your Love”? (Both Conniff and Kostelanetz gave it a shot.) 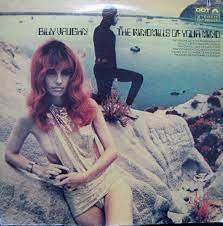 A generation that can produce such treacle as Barry Manilow or Air Supply needs no help from the easy riders. But just as the older listeners out there began dying off – their vinyl collections landing at the Goodwill and musty old used-record shops – we started losing those orchestral behemoths, too: Percy Faith passed away in 1976 while Andre Kostelonetz and Bert Kaempfert both died in 1980.

Ray Conniff recorded up to his death in 2002, though Columbia stopped issuing his records in the United States in 1980, a sign that there was no longer a market for his brand of music. At least here. The Spanish arm of CBS issued scores of Conniff aperitifs for fans throughout the rest of the world.

James Last moved to the U.S. in the early eighties, shortly after scoring his sole American hit, “Seduction” (1980), while Polydor continued issuing countless records under Last’s name (including truly cool mash-ups with hip-hop groups like Fettes Brott) until his death in 2015 – everywhere but in his adopted home country, the United States.

Lanza reasonably argues that easy-listening didn’t disappear so much as transform itself. Much the same could be said of jazz by its stauncher defenders. But he didn’t set out to chronicle the easy-fication of everything pop.

Here, Lanza focuses his sights on the multi-hued colors of psychedelic pop, which he successfully argues has the lyrical and melodic fortitude of all great music worthy of such genre transformation.

His respect and admiration for the multitudes of easy variations – and his keen sense to suss out and defend some of the craftiest and most obscure adaptions (Johnny Arthey’s Donovan set is as worthy as Lanza makes it out to be and he nails the Brass Ring’s strange yet captivating cover of “Rosemary’s Baby”) – is positively contagious.

Sorting through vinyl’s trash bins, Joseph Lanza finds a trove of trippy treasures, restoring a much-deserved respect to an inexplicably maligned genre that once was known as beautiful music. Easy-Listening Acid Trip makes for an enlightening and equally beautiful reading.