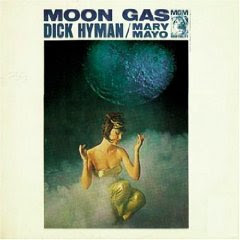 This strange and little-known record is one of a series of many strange and little-known records from pianist/organist/harpsichordist/Moogist Dick Hyman (b. 1927) yet probably ranks among the prodigious and imaginative keyboardist’s best – which insufficiently presumes anybody has heard all of the Dick Hyman recordings there are to hear under his name and various pseudonyms.

Moon Gas is just that – an otherworldly gas.

Like so many of his records, it is rather too gimmicky, taking fairly straight-ahead, even old-fashioned material and changing it up with strange keyboards – in this case, the Lowrey organ, the AOC (Automatic Orchestra Control) device and piano – peculiar sound effects and unusual instrumentation, all probably meant to set Hyman apart from the crowd by playing to the hype of aural fanaticism in the record industry at the time. The shame of this is that Dick Hyman is a tremendously gifted pianist and musical thinker who has an uncanny knack for engaging rapt attention no matter what or how he is playing.

Hyman had already begun his long string of probably better-known recordings for the Command/Project 3 labels with his 1960 trio-with-orchestra album Provocative Piano, so Moon Gas must have been some sort of contractual obligation. This 1963 album appears to be the last of some dozen and a half records Hyman made for MGM and the only one, I think, that the pianist ever did under the probable aegis of producer Creed Taylor.

Hyman is partnered here with the ethereal Mary Mayo (1924-1985), a singer of jingles including Coca-Cola’s famous “I’d like to Teach the World to Sing” and many uncredited backgrounds, who easily compares to the Italian film singer Edda Dell’orso for range and curiously transfixing vocal qualities, especially in her wordless work (“Moon Gas,” “Stella By Starlight”).

The originals are, ah, out of this world. The all-too brief title track, like Hyman’s later “The Minotaur,” is something of a cult classic. It’s a darkly funky vamp reveling in the oddity of the group’s outlandish electronics that prefigures what Hyman would do a few years later with a Moog synthesizer for James Brown’s “Give Up Or Turn It Loose.” Moon Gas is worth it for “Moon Gas” alone but there’s more. “Space Reflex” is a groovy update of the Dick Hyman-Leonard Feather composition “Bass Reflex” from the 1956 MGM LP Hi Fi Suite. It’s a basic blues, but Hyman works it well enough to make you consider that space is the place. This is his shining moment as a keyboard strategist on the album.

The bulk of the record finds the keyboard whiz inevitably covering a set of moony and starry standards, mostly in the tradition, but accented with Mayo’s haunting vocals and Hyman’s space age twists. These include “Stella by Starlight,” “Imagination,” “Bye Bye Blues,” “They Can’t Take That Away From Me,” “For All We Know,” “I’m Glad There Is You,” “Star Eyes” and the then-recent hit and soon-to-be standard “Desafinado,” which Mayo sings most beautifully in the original’s Portuguese language.

The standards are particularly rewarding – especially “Stella by Starlight” and “Desafinado” – in revealing Hyman as a remarkable scenarist. It’s no coincidence that he has backed countless singers and scored a number of commercials and films, most notably for Woody Allen. He knows how to set a mood. Mayo, too, works herself into the atmosphere nicely. She blends in so seamlessly that sometimes it’s hard to tell her voice from one of the keyboards. But she is so immediately attractive and striking as a vocalist that it’s really quite surprising she did not become better known during her lifetime.

While the electronic effects here can sometimes come off sounding silly, distracting or just plain out of place, Hyman is on firm footing directing the surprisingly minimalist rhythm section to just stick to good old-fashioned swing. Even the occasional bursts of electronic sound heard throughout remind you that these were the future sounds of yesterday and took musicians, not programmers or editors (Hyman talks with pride in the album’s notes about recording the sounds live rather than splicing them together to achieve the final outcome), to come up with these then unusual sounds.

Moon Gas, issued on Japanese CD by Vroom Sound in 2003 and now as difficult to find as the MGM LP, isn’t necessarily the best place to hear Dick Hyman play – there are zillions of records for that – but it is a terrific way to enjoy how well the multi-keyboardist and musical thinker absolutely masters unusual musical concepts. Aside from that, it’s just plain fun. Too much jazz takes itself too seriously, especially these days, making it a distinct pleasure to go back and enjoy Moon Gas every once in a while.

Plus: Read the incisive JazzWax interview with Dick Hyman here. And be sure to check out Dick Hyman's profile at the great Space Age Pop Music resource and Mary Mayo's daughter, Lorri Hafer, who was part of The Hillside Singers, who sung the huge hit "I'd Like To Teach The World To Sing."
Posted by Douglas Payne at 1:01 AM

Do you love Pepsi or Coke?
ANSWER THE POLL and you could win a prepaid VISA gift card!