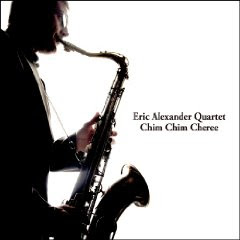 One could easily argue that Alexander, who was born the year after Coltrane died, is now the dominant tenor titan of jazz that Coltrane once was in his day. But while we still don’t yet have a “Giant Steps,” “Naima,” A Love Supreme or even a “My Favorite Things” from Eric Alexander, this amazing player’s output has proven that he is an inveterately invigorating interpreter and notably sensational improviser on a variety of interesting standards, pop tunes, Harold Mabern originals and some highly engaging originals of his own. None of this takes into account Eric Alexander’s many, many wonderful sideman appearances – something far too few jazz leaders do nowadays or do with the sort of redolent alacrity Eric Alexander brings to the proceedings.

One bristles at the thought of hearing what Eric Alexander might conceive of a John Coltrane tribute. Surely, it is not the slavish and boringly obvious treatise that so many other Coltrane tributes are. That is due, perhaps, to the interesting program Alexander has devised here – a mix of well-chosen Coltrane originals and less-than-obvious covers Coltrane is particularly known for – as well as the remarkable quartet the leader has assembled – featuring the great Memphis pianist Harold Mabern and longtime partners John Webber on bass and the ubiquitous Joe Farnsworth on drums – and the musically inspired Eric Alexander himself, who is undoubtedly behind the unconventional logic applied to each song and, the unquestionably blindfold-worthy source of the gorgeously melodic tenor solos contributed to each of the eight long performances heard here.

If one thing is apparent, this “tribute to John Coltrane” displays the highly original and effective groove this particular quartet has come to establish over time. Alexander had previously recorded something of a Coltrane tribute in 2007 with Webber and Farnsworth (and David Hazeltine instead of Harold Mabern on piano) on My Favorite Things (Venus) but has not worked with this particular combination since the 2004 recording Dead Center (they’re also together on Alexander’s 2001 outing Summit Meeting, Cecil Payne’s 1998 Payne’s Window and Jim Rotundi’s 1997 Jim’s Bop).

The brilliantly musical pianist Harold Mabern is probably most responsible for the disc’s overall sound and fans – such as your humble narrator – can find great satisfaction in his accompaniment and solo spots throughout. But it is Eric Alexander who makes Chim Chim Cheree worthwhile. The tenor titan takes apart each of these tunes without deconstructing any and rebuilds them to suit his own particular purpose. This in itself is noteworthy and commendable.

Highlights of this October 3, 2009, recording include the beautifully Mabern-esque take on the otherwise goofy “Chim Chim Cheree” (which Coltrane played magisterially on the 1965 album The John Coltrane Quartet Plays), the heavy-duty “Pursuance” (the third part of Coltrane’s well deservedly beloved “A Love Supreme” suite), the beautifully post-bop take on “Afro Blue” (something suggesting Hank Mobley, a Coltrane contemporary, but Harold Mabern and Eric Alexander here reclaim this sort of thing as their own) and the utterly lovely “Wise One” (which Coltrane originally assayed rather exceptionally on his 1964 album Crescent). Alexander treats the ballads “You Don’t Know What Love Is,” “On The Misty Night” (sic) and “The Night Has A Thousand Eyes” with some amount of unexpected verve and wit that unhinge them as ballads and proves he’s not merely an upstart or upsetter, but a man bursting with unique ideas and musical invention all his own. “Dear Lord,” a 1965 recording first heard on Coltrane’s posthumous 1969 recording Transition, is given, perhaps, the most notable treatment heard here with something of a sad, soulful groove (similar to Mabern’s “I Remember Britt”) that is both puzzling and moving all at once.

It’s not easy to walk away from this recording without feeling something. So, bravo. Stuff like Chim Chim Cheree simply doesn’t happen too often.

While this disc, which is said to also be released on vinyl too, is currently available only as a particularly expensive Japanese import from my friends at Mundo or HMV, it is worth hunting down as further evidence in the truly wonderful cataloging of one of the only – yes, the only - notable tenor saxophone expressionists in jazz today.
Posted by Douglas Payne at 12:04 AM

Excellent, insightful review, Doug - could not agree more - one of EA's finest discs to date.
Eric is truly our modern (largely unsung) Saxophone Colossus. Always such a joy to hear him work with Mabern. And talk about unsung - Joe Farnsworth on the drums, everybody!
Now if only Pony Canyon/Venus or Savant would re-issue the out-of-print 'Heavy Hitters' and 'Extra Innings', I could complete my Alexander/Mabern/Farnsworth collection!