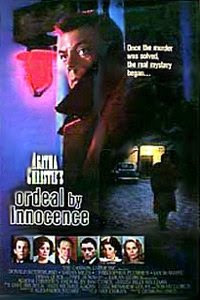 First published in 1958 in the UK and in 1959 in the US, Ordeal by Innocence is one of Agatha Christie’s finest, most gripping mysteries and one of the few that doesn’t feature the author’s serial sleuths Hercule Poirot or Miss Marple. The story presents one of the novelist’s classic – and too-little celebrated – twists on the detective fiction form. In this case, it is the investigation of a crime after the case is closed. To a lesser degree, the story's surprising ending is a nice twist on the form too. The story also presages, to a certain degree, the Italian giallo film by presenting an amateur sleuth who digs deeper into the crime than the professionals assigned to the case ever dared.

Arthur Calgary (Donald Sutherland) gives a ride to a young hitchhiker one night before departing for a sea-faring expedition, which keeps him incommunicado in the Antarctic for two years. Calgary discovers the young man, Jack (Jacko) Argyle, has left an address book with him and upon his return from the expedition two years later, goes to the Argyle household to return it. This is when Calgary discovers that the young man is now dead, having already been tried and found guilty of killing his own mother, Rachel Argyle. Calgary realizes that if he had been able to step forward earlier, he would have provided corroboration for the alibi the young man had claimed all along yet could not get verified at the time. Calgary attempts to re-open the case, against the wishes of the entire dysfunctional Argyle family, convinced that Jacko was an altogether bad lot and all unified in their happiness to be rid of Rachel, as well as the local constabulary, pleased with their own investigation of the crime. Several more Argyles are unfortunately killed along the way before the sad truth is revealed to Calgary about what really happened.

This 1985 cable-television film was a heroic attempt at filming Miss Christie’s novel, but the result is something of a spectacular failure. First and foremost, it comes across as trashmeister producers Golan and Globus of the Cannon Group’s bid to be taken seriously (pop lit? Oh well, it must be a safe bet.).

Throughout, it looks fantastic; in fact, stunning at times. But it often sounds shrill, off beat and mostly wrong headed. The film was directed by Desmond Davis, a former camera operator and director of a lot of British television, who was best known at the time for directing the trashy but star-packed Clash of the Titans (1981). His style seems to be all about making his stars look good. The interactions often seem all wrong, like posed model shoots or something.

But even the stars are mostly miscast here. It’s hard to figure out why Americans Donald Sutherland (who plays Calgary as an American) and Faye Dunaway (who plays Rachel Argyle in black and white flashbacks as the Brit her character is) are here. Both are, however, typically quite good in their rather unbelievable roles. Christopher Plummer, as Leo Argyle, is superb – as always – but the Canadian belies the book’s British paterfamilias by playing him as something of a gun-loving hard ass (he was more of a milquetoast in the book).

The film was shot in and around Dartmouth, Devon, England in late 1984 and, for the most part, the setting helps maintain the story’s 1950s setting quite well. Much of Calgary’s investigation takes him around the seaport town, discovering the odd vagaries of the odd and extended Argyle family (note, if you will, how Calgary is a near anagram of Argyle, for whatever the importance of this is worth). The film changes several aspects of the book – most notably, the fact that Jacko is hanged for his crime in the film, but he dies while in prison in the book – but resolves itself pretty much the same way in the end. Sutherland does a magnificent job going through the emotions of his investigation.

There is even something to be said for the fact that his character in the film might have harbored a homosexual longing for Jacko, the source of many people’s lust and hatred. Even the book doesn’t make it clear why Calgary would care so much about Jacko’s already foregone fate. It’s a pointless plot to pursue, but may explain part of why there is so much animosity against this film, which was also remade rather peculiarly and unsatisfactorily as an ITV Miss Marple mystery in 2007.

Director Davis is quite obviously a very visual scenarist, and overlooks some of the holes in the plot and Alexander Stuart’s mostly effective script. The film or its script is unsparing in its use of relentless flashbacks and the director uses black and white photography and voiceovers for the many, many flashback sequences. But while most all of these flashbacks and voiceovers are shared with the viewer via Calgary, the lead protagonist, it is peculiar to note that quite a few are not even his own recollections.

The film’s soundtrack was provided by the great jazz pianist and composer Dave Brubeck in one of his very few outings as a film scorer. The music is, quite notably, one of those things that most people either really like or really hate. I go both ways about it. The music is great. But it’s all wrong for the film, and often so overbearing as to be annoying.

The producers seemed to be trying to go for a fifties jazz sound, which doesn’t even make sense for the story (the fifties, yes – jazz, no), and Brubeck must have fit their idea of the bill. But Brubeck’s music is neither as time-locked as the story nor as mysterious as the plot’s machinations. Brubeck’s music is performed by the Dave Brubeck Quartet featuring the great man himself on piano, Bill Smith on clarinet, saxophone and recorder, (son) Chris Brubeck on bass and trombone and Randy Jones on drums. The music was recorded in San Francisco between the 1984 album For Iola and the 1985 Reflections.

The main theme, though, is particularly excellent. It accompanies, rather too loudly, a five and a half minute main title sequence that is gorgeously shot by cinematographer Ernest Vincze (Dr. Who, Jeeves and Wooster). Unfortuntaly, as wrong as the music seems to be for the mood of the film, it is a tremendous performance that has not appeared on record, either in its original form or as a cover tune elsewhere.

Brubeck inappropriately reprises the well-known “Blue Rondo a la Turk” (originally from the famed Time Out album, which probably caused the producers to seek the pianist in the first place, and revived similarly on Brubeck's 1986 album Blue Rondo) during Calgary’s interview of alcoholic Mary Durant and later when her husband, Philip, is discovered dead.

While it’s nowhere near perfect, Ordeal by Innocence is as good as it is going to get for this story for the time being and, for the record, is thoroughly enjoyable on a cult level for lovers of Agatha Christie’s wonderfully intoxicating detective fiction and the appreciation of some good, if misplaced, jazz.
Posted by Douglas Payne at 11:59 PM

Well-written enjoyable review covering all of the Christie film production elements that are also critical to my exploration at these attempts to translate her authored genius to media exposition.