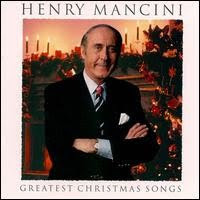 Seems this time of year is tailor-made for the beautiful music of Henry Mancini. But, surprisingly, there isn’t that much Mancini holiday music available. What is available, though, is mostly worthwhile, though – like Christmas is for some of us – leaves a feeling of not quite getting near what you hoped for (yes, I know, Christmas is all about giving).

Now, some 15 Christmases after his death, we must learn to make due with what the Maestro has left us. It really boils down to two albums and some change. The RCA album has been reissued year after year since its 1966 release in every topical format since then and many of its songs were compiled on countless (mostly LP) compilations. The EMI soundtrack is a bit more obscure and, to my knowledge, may have appeared on CD only once and very briefly. 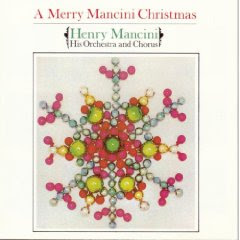 A Merry Mancini Christmas (RCA, 1966): While one could hope that Henry Mancini’s one and only holiday album would have been more in the jazz-lite vein of “The Pink Panther,” A Merry Mancini Christmas takes the form of choral medleys, pairing up similar carols. Mancini’s terrific orchestrations make this very traditional holiday fare worth hearing and certainly this rather too-precious music has echoed throughout many family holidays, bringing cheer to many throughout the years. The chorus takes charge of almost all of the melodies here and Mancini spices the Christmas cheer with dashes of oboe, flute, French Horn, Laurindo Almeida’s guitar (“It Came Upon A Midnight Clear/Away In A Manger/The First Noel”) and, most appealingly, Pearl Kaufman’s tastefully appropriate harpsichord. The jazziest things get here is on the Flintstones-like swing of “Jingle Bells/Sleigh Ride” and the only track that – refreshingly – doesn’t feature vocals, “Carol for Another Christmas,” while a typically wonderful Mancini concoction, doesn’t sound particularly Christmas-y. Still, many a fan have kept this record in print for nearly four decades in a variety of guises, notably one featuring a cover showing Mancini at the piano surrounded by his family and another featuring a cover showing a snowflake made out of colorful Christmas bulbs. 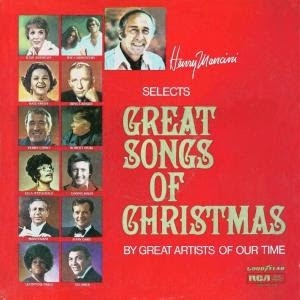 The album was issued in full in 2000 as Greatest Christmas Songs (pictured at the top) with holiday-related songs Mancini recorded elsewhere: “Snowfall” (from 1959’s The Mancini Touch), “Baby, It’s Cold Outside” (from 1965’s The Academy Award Songs) and “Have Yourself A Merry Little Christmas” and “What Are You Doing New Year’s Eve/Auld Lang Syne” (from an obscure 1975 RCA album called Henry Mancini Selects Great Songs Of Christmas By Great Artists of Our Time, pictured above, marketed through the Goodyear tire company). 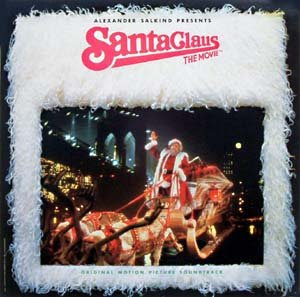 Santa Claus – The Movie (EMI America, 1985): This little-known Dudley Moore film, directed by famed TV director Jeannot Swarc, benefits by an inevitably charming seasonal score by composer Henry Mancini. If anyone could score the holidays effectively, it is Henry Mancini (and, to be fair, John Williams, who has provided his share of holiday charm in his Home Alone and Harry Potter films), which makes it something of a surprise that there aren’t more examples of merry Mancini records. What’s even more surprising is that Henry Mancini’s name doesn’t even appear on the cover of the album! There are a number of amiable choral pieces here featuring the lyrics of Mancini’s Victor-Victoria and Tom And Jerry – The Movie collaborator, Leslie Bricusse, and voiced marvelously by The Ambrosian Children’s Choir. These pieces, which have a remarkable air of timelessness, sound like they have been around forever and offer a fair bit more orchestration in and around the vocals than one would expect. But it makes for more Mancini to enjoy and appreciate. Among the highlights here are the delightful and seemingly familiar “Sleigh Ride Over Manhattan,” the immaculately scored holiday medley “Christmas Rhapsody,” “March of the Elves,” “Thank You, Santa” and “Every Christmas Eve & Santa’s Theme,” sung here by Aled Jones (Mancini also recorded the song with Johnny Mathis for the singer’s 1986 Christmas Eve album). The only downsides to this soundtrack album – which appears to be scheduled for CD release from the Singular Sountrack label for January 2010 – are Sheena Easton’s histrionic “It’s Christmas All Over The World,” and the ridiculously out-of-place “Shouldn’t Do That” by Kaja, both having absolutely nothing to do with Mancini or the rest of the score. Santa Claus – The Movie may not hold up well as pleasant background music, but serves as a potent reminder of how spectacular a composer and orchestrator Henry Mancini was.
Posted by Douglas Payne at 9:28 PM