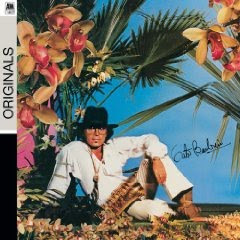 Universal Music continues its amazing reissue campaign with a rather surprising amount of the 1970s-era releases of Argentine saxophonist Gato Barbieri (b. 1934). Tropico (1978), the third of five A&M albums the saxophonist made, is the sixth and most recent of the Barbieri reissues Universal has put out in just the last two years.

No other Universal contract player has gotten that sort of concrete attention in these, CD’s waning years, so this one might be worth some sort of mention. And, indeed, upon reflection, it is.

The saxophonist is best known as being the second most famous export from Argentina after Lalo Schifrin, in whose orchestra Barbieri played during the 1950s, and as composer of the aching score to the 1972 Marlon Brando film, Last Tango In Paris.

Barbieri has also had a storied career in jazz, where he exploded in the 1960s as one of the firebrands of “the new thing,” alternating progressive and aggressive recordings with haunting Dollar Brand duets.

Upon moving to Bob Thiele’s Flying Dutchman Records, Barbieri began exploring music’s fire within melodic confines. Shortly thereafter he launched a series of records on the Impulse label surveying his jazz sensibilities from within his native heritage.

When he moved over to Herb Alpert’s A&M Records in 1976, Barbieri was aiming for the hit status that also took fellow former firebrand John Klemmer to new heights of AM radio friendliness. There seemed no shame in it. Barbieri wanted a hit. But while the hits never came, Barbieri took many hits from critics and former fans appalled to affront by his blatantly commercial direction. In other words, Barbieri didn’t make new friends; he lost old friends.

Still, his A&M albums make for some of Barbieri’s most enjoyable listening and Tropico is probably the best of the bunch. Produced by David Rubinson, who at the time (1971-82) was handling everything by Herbie Hancock, it is as close to pure disco as just about anything else in jazz was at the time. The electric bass, the swirling strings, the layered keyboards and percussion all scream for something other than the music Barbieri was making only ten years before. We’re meant to feel this and react appropriately, not think about it.

Things get off to a rocky start with a thumping dance version of “Poinciana” that goes on far longer than its seven minutes and 48 seconds justify, particularly the chorus chanting “we love it when you can dance to it” repeatedly, and a fairly unimaginative cover of the 1972 Roberta Flack and Donny Hathaway hit “Where is the Love,” featuring a guitar solo by what sounds like Eric Gale.

But the rest of the 46-minute disc is fairly entertaining and, well, rather remarkable. Barbieri’s own “Latin Lady” opens with what is obviously Carlos Santana’s patented guitar wail (Rubinson was also producing the guitarist’s jazz album The Swing of Delight at the time) and the guitarist caresses the melody throughout its eight-minute entirety with an emotional energy that perfectly matches the depth and breadth of Barbieri’s own. Santana is very appropriately matched to the blistering melancholy that runs through much of Barbieri’s playing and certainly in many of the saxophonist’s compositions. Musically, the guitarist and the saxophonist spar particularly well, forming a bond not unlike potential suitors for the same beloved woman who has rejected them both out of hand. It is surprising that Santana and Barbieri have not worked more together.

The album’s finest tracks are Barbieri’s “Evil Eyes” and the saxophonist’s cover of Caetano Veloso’s mesmerizing “Odara.” “Evil Eyes,” in particular sounds like a movie theme of the time, in fact, one very much like Lalo Schifrin would have done – and for that alone, Tropico is worthwhile. Coincidentally, Schifin too did a disco version of Ravel’s Bolero, as Barbieri does here, in a Rubinson arrangement that is not too dissimilar from Schifrin’s of a few years before.

Tropico is odd in some ways too. Considering the high profile David Rubinson brings to any of his productions, there are no musician credits listed here. Very strange, considering the high caliber of talent that’s probably involved. There must have been contract disputes.

Who wouldn’t – and didn’t – want to brag about the presence of Carlos Santana? Considering Herbie Hancock appears on almost every other Rubinson production at the time, it’s a good guess he’s probably playing on Tropico too. There is some evidence, though, that something was amiss here. Barbieri’s A&M albums bookending Tropico were both produced by Jay Chattaway, who at the time was Tappan Zee’s in-house musical director. So Rubinson, for whatever reason, wasn’t invited back.

Maybe someone didn’t get along with somebody. Who knows. The result, Tropicos, speaks for itself. It’s a fine piece of work of what can be called disco jazz and it ranks among some of the best of Barbieri’s popularly oriented music, something he’s still at and which he’s been doing since at least 1976.

Addendum: The redoubtably knowledgable Kirkatron has provided musician credits for Tropico below from the inside sleeve of the original LP. Thanks, Pete!

This still has to be released here in the UK. I still have the original vinyl. It got terribly slagged off at the time I seem to recall. Whilst I always preferred Caliente to this I would agree that 50% of this is great stuff. It's good that Universal have made Barbieri's Impulse and A&M recordings more widely availabe again.

That is indeed a stellar album. "Evil Eyes" is one his greatest tracks of this era. Thanks for posting.