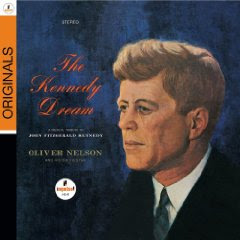 At a time when most of what used to be called “record companies,” are slashing budgets, cutting staff or going out of business altogether, Universal Music has been doing a superb job reissuing their huge treasure trove of jazz on CD. Through its Originals program, dozens of nearly forgotten jazz gems from the old Verve, Impulse, A&M, Philips, MGM, Mercury and Limelight catalogs are finding their way back onto the nearly 30-year old CD format.

The other majors (WEA, Sony, EMI) are either (thankfully) licensing albums out to boutique reissue labels like Water, Wounded Bird, Collector’s Choice and Collectables or making the music available for download only. Universal Music’s Original series is catering its great wealth of music to what has become an appreciative, though small and shrinking, market base that still likes to have and hold music with great cover art, musical credits and, in some cases, liner notes (which CDs tend to make almost impossible to read).

To get an idea of just how obscure some of these Originals releases are, take the Oliver Nelson (1932-75) album The Kennedy Dream: A Musical Tribute To John Fitzgerald Kennedy, originally released in 1967 by the Impulse Records label. Even in 1967, hardly anyone knew the record existed. These days, Oliver Nelson’s name barely registers. Sadly, he does not get the recognition he so richly deserves outside of the required nod to “Stolen Moments,” Blues and the Abstract Truth, the brilliant 1961 album “Stolen Moments” appeared on, and – often snidely – a handful of Jimmy Smith’s Verve albums.

The release of Oliver Nelson’s The Kennedy Dream is, indeed, cause for celebration. It is a masterful work that ranks high among the composer’s very best work. This tribute is probably one of the most personal, deeply felt pieces he was ever asked to do outside of Afro/American Sketches (Prestige, 1961) or Black Brown and Beautiful (Flying Dutchman, 1969). And the sincerity of his conviction shines through, producing an impassioned tribute to an inspired leader who inspired much hope for a brighter future and a better world.

The Kennedy Dream is a semi-orchestral suite in which seven of the eight compositions are launched by brief, yet memorable sections of John Kennedy’s speeches about equality and positive change. The recording was made over two days in February 1967, with a small, uncredited cast of New York’s finest session men, including Snooky Young on trumpet, Jerome Richardson and Jerry Dodgion on reeds, Phil Woods on alto sax (and solos), Phil Bodner on English horn, Danny Bank on bass clarinet, Don Butterfield on tuba, Hank Jones on piano and harpsichord, George Duvivier on bass and Grady Tate on drums.

Despite the stirring of Kennedy’s words and the rush of the occasional solo, one’s attention and admiration is drawn throughout to Nelson’s beautiful melodies, constructed with evocative passages and very personable turns of phrase. His writing for strings, for which he never got his proper due, is remarkable; filled with a purposeful passion and a rare and poetic restraint.

Each of the suite’s eight pieces have a chapter-like quality in what could be considered a musical novella – not quite the magnum opus it might have been under different circumstances (thanks to producer Bob Thiele, Nelson was probably lucky to get this record made at all) but certainly more reflective and insightful than a mere song could have ever conveyed. Still, the album’s highlights include “Let The Word Go Forth” (based on Example 45 from Nelson’s instruction book Patterns For Saxophone), “The Artist’s Rightful Place,” known elsewhere as “Patterns For Orchestra” and, most notably, the outstanding “The Rights of All,” featuring a pizzicato strings rhythm and a gripping Phil Woods solo.

Released on CD* in what would have been Kennedy’s 82nd year – and during the first year into the term of a president who presents as much hope for positive change as Kennedy once did - The Kennedy Dream is a remarkable work from a period when orchestral jazz was not all that uncommon. It is as much a musical tribute to the presidential legacy of John Fitzgerald Kennedy as it is a documented tribute to the beautiful musical legacy of Oliver Edward Nelson.

* The Kennedy Dream was included on the 6-CD Mosaic boxset, Oliver Nelson: The Argo, Verve and Impulse Big Band Studio Sessions issued in February 2006.
Posted by Douglas Payne at 1:59 AM

Thanks Doug for this review as I am currently waiting for a vinyl original of this to wing it's way here from your side of the pond.

I am now even more eager to listen to it.

Its one of my faves of all time ,have the lp and the mosaic set may even buy the reissue cd ...sad aren't I

This album has been my treasure for many years. It was my first encounter with the musical genius of Oliver Nelson which sparked my interest in his artistic style and his musical legacy. The Kennedy Dream is such a intricate piece in total and so elegant a recording with each track. I thank you for your blog to further enhance my appreciation for this exquisite vinyl album I've treasured in my music library. This is truly one of the greatest works of this unsung pioneer, Oliver Nelson.