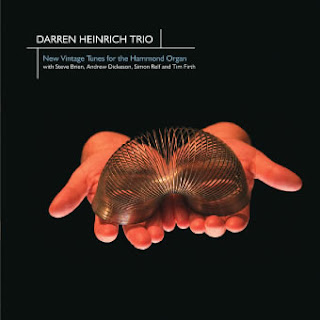 Sydney-based organist Darren Heinrich resurrects a tradition that may not have existed since sometime during the late 1960s, some 40 years ago. It’s not the organ trio he helms with aplomb here, which was ushered into revival by the acid jazz scene of the mid 1980s. It’s the feeling for organ jazz that Heinrich has re-discovered and imparts on his perfectly dubbed New Vintage Tunes for the Hammond Organ.

Back when stores were littered with the records of Jimmy Smith, Jimmy McGriff, Jack McDuff, Larry Young, Charles Earland, Groove Holmes, John Patton, Shirley Scott, Lonnie Smith, Don Patterson and Johnny “Hammond” Smith – to name just a few – it was easy to find music like this. But after electric keyboards made the Hammond B-3 a useless relic of a bygone era, neither the revivalists nor the old masters plugging in their dusty old B-3s were able to quite bring back the feeling that was there in the first place. Joey DeFranscesco came close. But after two decades of recording, even he has yet to wax a must-have record.

New Vintage Tunes for the Hammond Organ is a mouthful that may get it exactly right. This music is sincerely delivered and strikingly unaffected, something this listener hasn’t heard on an organ jazz record for a very long time. It never struggles to be something it is not nor re-creates something that already exists. If I want to hear Jimmy Smith, I’ll buy a Jimmy Smith CD, thank you. There are ten originals here that are so strong on their own that no fake-book standard is required or needed. No special guests that are there only to ensure an emotional connection are necessary. No gimmicks that call to mind something or someone else are invited in.

As a player and as a thinker, Darren Heinrich most recalls mid-1960s-era Larry Young and, to a much lesser extent, Blue Note-era Lonnie Smith (Heinrich is actually studying with the good Doctor this summer). But this is not to say that Heinrich hi-jacks or imitates these organ masters. It’s the feeling these organists brought to their recordings that Heinrich captures so well. It’s the vibe and vibrancy the music had back then. Heinrich has something to say that's worth tuning into and, like the organ grinders of yore, it sticks with you

Heinrich works with two trios here. One, featuring notable Sydney-based guitarist Steve Brien and drummer Andrew Dickeson, both of whom accompany Heinrich on his recent The Jimmy Smith/Larry Young Project LIVE, works in the mid-1960s mode that recalls the melodically constructed yet introspective musings of Larry Young circa 1964-65, when the organist was working a lot with Grant Green.

This trio, which mans exactly half of the disc’s songs, provides what for me are the disc’s true highlights, from the mid-tempo blues of “Lunar,” the brainy funk of “Willow” and the stand-out groove of the catchy, butt-shaking, finger-snapping “The Poledancer” to the “Autumn in New York” styled ballad “I Don’t Know” and “Early Autumn,” which could have been the second track on any Blue Note album of the mid 1960s. The hit-worthy “Poledancer” is the album’s best moment and precisely the type of insistent groove you’d hear blasting out of any number of juke boxes back in the day. It’ll certainly turn heads to wonder who is doing it if it happens to be in Pandora Radio’s playlist.

The other grouping, featuring guitarist Simon Reif and drummer Tim Firth, is quite a bit greasier than the first, wallowing in the mid-1960s fatback of Jack McDuff by way of Lonnie Smith (both, coincidentally, played a lot with George Benson at the time). It’s Reif and Firth who give the group the Jack McDuff vibe. Heinrich brings to it that exquisitely soulful touch Lonnie Smith brought to his early Blue Note albums. While it’s an excellent contrast to the other more cerebral grouping, this trio doesn’t escape Heinrich’s consistent oversight. He makes gravy out of “Hicksville,” “Meanderthal” and the album’s second-best groover, “Slinky” (titled for the toy the song reminds Heinrich of, hence the photo on the disc’s cover – which nearly makes this the CD’s title tune). The trio ruminates rather engagingly on the atmospheric “Hello Goodbye,” on which Heinrich recalls some of Shirley Scott’s quieter moments, and the playfully serious “Three Shades of Green” – which, if it is meant to honor guitarist Grant Green, gets a marvelous tribute from guitarist Reif and Heirich, the excellent synthesist of John Patton and Larry Young, as the third shade.

The CD includes alternate takes of both “Meanderthal” and “Willow” which switches trios from the earlier versions, making a fascinating case for the different vibe each group brings to Heinrich’s approach. What you hear is everybody listening to everyone else, the way jazz was meant to be.

A pure delight throughout, New Vintage Tunes for the Hammond Organ is an ideal celebration of the Hammond organ on its 75th birthday and should work to place Darren Heinrich in the pantheon of great jazz organists. For more information, visit Darren Heinrich’s dazzjazz site.
Posted by Douglas Payne at 1:09 PM

I've just downloaded iStripper, and now I enjoy having the sexiest virtual strippers on my taskbar.