”A streak of otherworldliness ran all the way through David Crosby’s long, complicated life in music,” the New York Times writer Jon Pareles noted beautifully in his recent appreciation of the singer, songwriter and guitarist. The same could be said of David Crosby’s music, too.

Sadly, David Crosby died this week, on Wednesday, January 18. He was 81. Crosby was best known as founding member of both the psychedelic-rock band The Byrds and the folk-rock supergroup Crosby, Stills & Nash – and sometimes Young.

Both groups were loaded with tremendously gifted singers and songwriters, all of whom have contributed memorably to the pop and rock world. Indeed, both groups were inducted into the Rock & Roll Hall of Fame: The Byrds in 1991 and Crosby, Stills & Nash in 1997. (Neil Young was inducted twice – as a solo artist and member of Buffalo Springfield.)

But of all those great writers and musicians, it is only David Crosby whose music has crossed over easily into jazz. That’s probably not an accident. Crosby was turned on to jazz as a teenager by his brother Ethan, a drummer, getting in to records by Dave Brubeck, Gerry Mulligan, Chet Baker, Bill Evans and Miles Davis.

John Coltrane had a “huge impact” on Crosby when he saw the saxophonist live at McKie’s in Chicago’s South Side in 1961. Indeed, Crosby claimed Coltrane informed one of his earliest hits, The Byrds’ “Eight Miles High” (co-written by Roger McGuinn and Gene Clark). Crosby and Roger McGuinn were listening to Coltrane’s Africa/Brass at the time. The album influenced Crosby’s vocal phrasing and McGuinn’s guitar solo.

Crosby rarely wrote in rote rock keys or time signatures (4/4 or 3/4). Take “Guinnevere,” from Crosby, Stills & Nash’s eponymous 1969 debut: it shifts from 4/4 to 6/8 to 7/4. Crosby’s “Déjà Vu,” the title track to the 1970 CSNY album, is also greatly informed by jazz, starting off in 6/8 time, but feeling like a straight 4/4, even moving through odd keys that a jazz artist would feel at home in. “The influences were going in both directions back then,” David Crosby told JazzTimes in 2019. “Miles was listening to singer-songwriter music and pulling it into the jazz idiom. You hear us listening to John Coltrane, and we pull his horn style into a rock-and-roll song. It happened a lot. That’s how new music happens. You take two extremes and you synthesize a new one out of those.”

David Crosby and Graham Nash recorded six albums as a duo between 1972 and 2004 while Crosby released eight studio albums under his own name between 1971 and 2021. 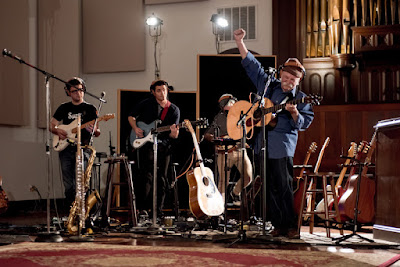 Jazz came to more prominence in Crosby’s music later in his career. Crosby formed the jazz-rock trio CPR, with his biological son, James Raymond – who he had given up for adoption many years before. In 2013, Crosby collaborated with Wynton Marsalis and Jazz at Lincoln Center for a pair of New York concerts. In return, Marsalis guested on Crosby’s 2014 disc Croz.

A great fan of the brilliant collective Snarky Puppy, Crosby himself appeared on the band’s 2016 disc Family Dinner Volume Two, while Snarky Puppy’s Michael League produced Crosby’s own Lighthouse of the same year.

Jazz discovered David Crosby early on, notably with “Eight Miles High” and then, later, with “Guinnevere.” But while those are usually the most interesting takes of David Crosby’s songwriting, there are other jazz treats bearing Croz’s signature.

A very pleasant surprise to me is that I already had much of this music in my own collection.

”Eight Miles High”: Written by Gene Clark, Jim McGuinn (a.k.a. Roger McGuinn) and David Crosby from the third Byrds album Fifth Dimension. “Eight Miles High” was a 1966 Top 20 hit for the Byrds. It is musically influenced by Ravi Shankar and John Coltrane, the song was innovative, controversial and now considered a classic psychedelic rock song.

Jazz covers of “Eight Miles High” include the Paul Horn Quintet on Monday, Monday (1966), the Soulful Strings on Paint it Black (1966), Bob Thiele and the New Happy Times Orchestra on Light My Fire (1967), Steve Marcus on Tomorrow Never Knows (1967) and a truly weird funk-on-steroids version by bagpiper Rufus Harley on King/Queens (1970).

”Lady Friend”: Written by David Crosby, the only a-side Byrds single credited to Crosby. Released as a single in 1967, it only reached number 82 on Billboard’s Top 100. The Byrds performed “Lady Friend” at that year’s Monterey Pop Festival, but the song’s lack of success caused it to be left off the group’s next album, The Notorious Byrd Brothers, and was partly the reason Crosby was fired from the group.

”Long Time Gone”: Written by David Crosby for the 1969 album Crosby, Stills & Nash, after the assassination of Robert Kennedy in 1968. The song was issued as the b-side to CSN’s first single, Stephen Stills’ “Suite: Judy Blue Eyes.”

Jazz covers of “Long Time Gone” include Bud Shank with the Bob Alcivar Singers on Let it Be (1970 – bizarrely credited to Tex Ritter and Frank Harford), Paul Horn on Visions (1974) and Hiram Bullock on “Late Night Talk” (1997).

”Guinnevere”: Perhaps David Crosby’s best and best-known song. “Guinnevere” first appeared on the 1969 album Crosby, Stills & Nash. Crosby told Rolling Stone in 2008, “It's about three women that I loved. One of whom was Christine Hinton - the girl who got killed who was my girlfriend - and one of whom was Joni Mitchell, and the other one is somebody that I can’t tell.” That someone is believed to be Crosby’s former girlfriend, Nancy Ross.

Robert Christgau has said that “Guinnevere” was based on a three-note motif Crosby lifted from Miles Davis’ Sketches of Spain (1960), which makes it interesting that Davis himself recorded the song in early 1970. According to Crosby, Davis played the songwriter his version of the song. When Crosby didn’t recognize the tune as his own, Davis allegedly kicked him out of the house. Curiously, though, Davis chose not to immediately release the song.

Miles Davis’ stunning cover of “Guinnevere” was finally issued in 1979 on Circle in the Round, a compilation of previously unissued recordings, while a longer version of the song was included on the 1998 CD box of The Complete Bitches Brew Sessions.

Other jazz versions of “Guinnevere” can be heard by Herbie Mann on Memphis Two-Step (1971), Paul Horn on Visions (1974) and Mark Soskin on Everything Old is New Again (2020).

”Wooden Ships”: Written by David Crosby, Stephen Stills and Jefferson Airplane’s Paul Kantner. The song originally appeared in different versions on the 1969 albums Crosby, Stills & Nash (where it was long credited to only Crosby and Stills) and Jefferson Airplane’s Volunteers (which features Crosby and Stills as guests). The only known jazz cover of "Wooden Ships" is by former Gabor Szabo guitarist Jimmy Stewart on his 1977 album Fire Flower.

”Song With No Words (Trees With No Leaves)”: Written by David Crosby, “Song With No Words” first appeared on Crosby’s 1971 solo debut, If I Could Only Remember My Name. Apparently, the song was written during the recording of the CSN&Y album Déjà Vu and intended for that album but that version of the song was eventually included on the expanded CD version of Crosby, Stills & Nash, issued in 2006.

”Almost Cut My Hair” – Fareed Haque from the 1997 album Déjà Vu, a jazz interpretation of the 1970 album of the same name by Crosby, Stills, Nash & Young.

”Almost Cut My Hair”: – Written by David Crosby for the 1970 Crosby, Stills, Nash & Young album Déjà Vu, this song immortalized the line “I feel like letting my freak flag fly.” The anthem became a favorite Crosby concert staple, although Crosby himself said of the tune, “It was the most juvenile set of lyrics I’ve ever written…but it has a certain emotional impact, there’s no question about that.”

”Déjà Vu”: David Crosby’s title track to the second CSN album and first album the trio made with Neil Young, an album that yielded three Top 40 singles – none by Crosby – and Neil Young’s “Helpless,” which Crosby claimed in a 2019 documentary to be his favorite CSNY song.

Posted by Douglas Payne at 8:40 PM