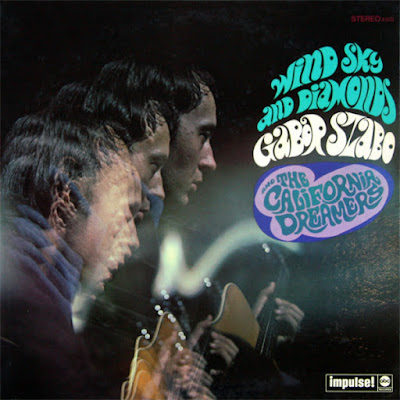 Nice to see an appreciation – or any appreciation – of the 1967 Gabor Szabo album Wind, Sky and Diamonds, featured as part of Wax Poetics’ Re:Discovery series this week.

This is surely one of the guitarist’s least known and rarely celebrated albums. Wind, Sky and Diamonds, which was co-billed to the California Dreamers, a short-lived studio vocal collective, was the last of Szabo’s four studio albums released on Impulse during 1966 and 1967.

While the record is, perhaps, unusual in Szabo’s discography, it is of a piece with saxophonist Tom Scott’s solo debut, The Honeysuckle Breeze, and producer/nominal leader Bob Thiele’s Light My Fire (also prominently featuring Scott and Szabo). Indeed, all three records were waxed at about the same time with the same cast of LA-based musicians.

Surely, each of these three records has its highlights, all have their fair share of badly-dated groaners. That all three records seemed gimcracked toward the “easy listening” crowd rather than a jazz – or even crossover – audience is telling: made for the masses and appealing to…some, maybe.

Highlights on Wind, Sky and Diamonds include “Guantanamera,” featuring Szabo’s genuinely moving recitation, “Are You There” and a daring take on “White Rabbit.” Szabo performed “Lucy in the Sky with Diamonds” – brilliantly – with his own group four days after this recording (it can be heard on the More Sorcery album) which easily bests the workmanlike performance heard here.

The live “Lucy” suggests that producer Bob Thiele regrettably passed up an opportunity to see what Szabo’s own quintet would have made of these tunes. Curiously, it’s not something he would have asked someone like John Coltrane, who had passed away only two months before, to do.

In the end, Wind, Sky and Diamonds feels like what Monty Python blatantly called one of its records, the “contractual obligation album,” and may well be the reason Gabor Szabo left Impulse in the first place. It has all the hallmarks of showing up and getting paid, as if to say “I did what they wanted.”

Over two dozen years ago, I wrote the following review for Wind, Sky and Diamonds. I still stand by it. Even if all of us can't decide what sort of record this should have been, it’s worth appreciating what record Gabor Szabo left us with: 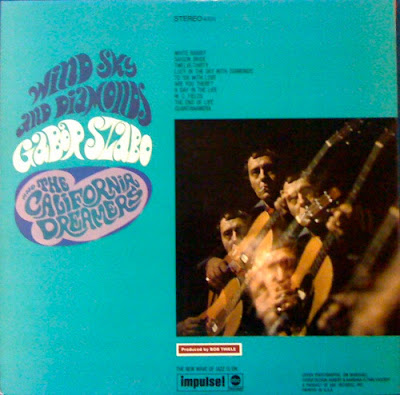 A most unusual record, Wind, Sky and Diamonds is an intriguing, though not quite successful jazz-rock experiment. Superior West Coast jazz talent is present -- including guitarists Howard Roberts, Dennis Budimer and Herb Ellis, pianist Mike Melvoin and percussionists Victor Feldman and Emil Richards. But there's little in the music that departs from the main, familiar pop-rock melodies. It seems the real intention is to spotlight the vocalists; a group of studio singers, known at the time as the California Dreamers (these familiar voices have since been heard in many TV commercials and as part of the Partridge Family and Quincy Jones productions).

Szabo himself seems like an afterthought. His familiar guitar is hardly noticeable and his ideas seem tacked on to the proceedings. He is subjected to noodling occasionally between vocal lines and only infrequently carries the melody ("White Rabbit," "Lucy In The Sky With Diamonds"). Even less often, unfortunately, he is provided opportunity to pilot a brief, but meaningful solo ("Twelve Thirty," "Guantanamera" "Are You There").

Regardless, Wind, Sky and Diamonds remains an important part of Gabor Szabo's discography. It celebrates much of what was important to the guitarist: the new world of rock music, the beauty of California, the hope and inspiration sweeping through the "Summer of Love," the freedom drugs promised and a whole new world that seemed to be shaping before everybody's eyes that year.

Szabo even reiterates the importance of this music by taking two impassioned recitations. The first begins the album in a prologue to the Animal's "San Franciscan Nights":

"The following song is dedicated to the city and the people of San Francisco; who may not know it, but they are beautiful. And so is their city. This a very personal song. So if you cannot understand it, particularly my friends in Budapest, save up all your bread and fly Translove Airways to San Francisco, USA. Then maybe you’ll understand this song. It will be worth it; if not for the sake of this song, but for the sake of your own piece of mind. So I’ll meet you in San Francisco. Or for those of you in Budapest, San Francisco ban találkozunk!"

Szabo's next recitation follows a superb acoustic guitar solo in "Guantanamera," the beautiful Jose Marti poem set to the tune of a popular song from Havana (when it was refitted with English words and performed by American folk singer Pete Seeger in 1961, it became an international hit):

This is an exceptional performance, highlighted by a solo that clearly reflects fellow guitarist Jimmy Stewart's profound and creative impact on Szabo. It seems ultimately surprising that Szabo never performed "Guantanamera" again in his career. He really brings this meaningful rendition to life.

"Are You There" is another highlight. Starting with Szabo's melody for "Fox" (performed on Songs for Gentle People) and adding Steve Allen's interesting lyrics, this song has the album's strongest "rock" feel and benefits from Szabo's meatiest solo on the record.

It's perhaps notable that Wind, Sky and Diamonds was the first solo album Gabor Szabo recorded on the West Coast, near his own home. With rare exception (Small World, Mizrab, Rambler, Nightflight and Belsta River), Szabo would perform and record almost exclusively on the West Coast for the rest of his career.

Endnote: An interesting companion to Wind, Sky and Diamonds is George Benson’s 1971 CTI album, White Rabbit. Much of Benson’s playing here is challenging (as he scales basic chord changes with his own original inventions), appealingly mysterious, and often adds something of Szabo's metallic edge to his own pretty style. Benson can be heard performing a similar version of the Jefferson Airplane’s "White Rabbit" (with a Don Sebesky arrangement) and a very Szaboesque version of a Mamas and Papas tune ("California Dreaming"), made popular in jazz circles by Wes Montgomery. What's even more interesting is that Leonard Feather played Benson's "Summer of '42" (from White Rabbit) for Szabo during a 1975 DownBeat Blindfold Test. Szabo reacted by saying, "First of all, I do like this music very much; it's very warm, beautifully arranged. I particularly liked [Benson's] control when it came to technique, as well as the emotional message. In a strange way, it sometimes reminded me of myself [and] sometimes it reminded me of Wes Montgomery." Oddly, though, Szabo was able to identify Creed Taylor's production and Don Sebesky's arrangement, but was unable to name the signature playing of George Benson.

Posted by Douglas Payne at 9:41 PM