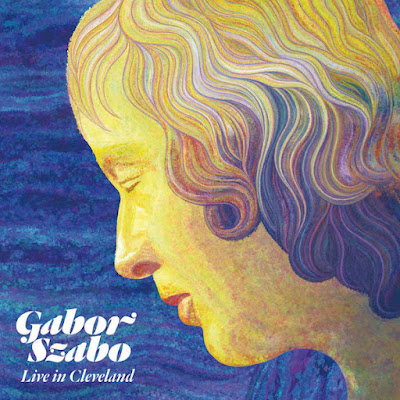 Ebalunga has just put out Hungarian guitarist Gabor Szabo’s tremendous Live in Cleveland - for the first time on LP and CD. The wonderfully eclectic specialty label has previously issued the guitarist’s 1968 albums Bacchanal and Dreams in equally pristine vinyl and beautifully-packaged CD formats – as well as high-quality downloads for those, unlike me, who enjoy music that way.

Here, Ebalunga shines a light on the concert Szabo with this live date superbly captured for radio broadcast at Cleveland’s famed Agora Ballroom.

Recorded some 46 summers ago in August 1976 – still memorable as the season of George Benson’s monster hit album Breezin’ (whose title track originated with Szabo) and several months after Szabo’s own Mercury debut Nightflight (whose title track is heard here) was released – this concert catches the guitarist at his very best with his own quartet in the intimate setting where he always excelled – in front of an audience.

Surprisingly, Szabo’s performance here is one of the very few that have surfaced or survived from this 1976 concert series, presented by the Japanese audio and video manufacturer Sansui Electronics and dubbed the “New World of Jazz.” Other performers captured for the series are said to have included Ben Sidran, Pat Martino, Hubert Laws’ then up-and-coming brother Ronnie, and David Sanborn.

But it is one of several Szabo concert recordings known to exist from the seventies, like Live in Cleveland, all well worth savoring. (Personal shout out to the owners of Szabo’s 1976 Vancouver set and the 1979 Montreux performance with guitarist Joe Beck to get this music out.)

Again, Ebalunga has remarkably showcased Gabor Szabo in a yet another fine package, with newly-commissioned cover art and design by Anton Bodanov and liner notes by yours truly.

The disc has been lovingly mastered by Jessica Thompson, renowned for her work on many live recordings and for restoring and remastering Erroll Garner’s iconic and Grammy-nominated The Complete Concert by the Sea (2015). While the Szabo performance was captured on equipment that was then state of the art, Thompson’s sublime mastering brings the guitarist right into the room with the listener.

This is truly one for the guitarist’s fans. Live in Cleveland is arguably more representative of where Gabor Szabo was musically than his records at the time were. Plus, it’s a real joy to hear Gabor in his element.

Posted by Douglas Payne at 3:47 PM

I remember listening to the radio broadcast on this performance by Gabor Szabo at the Agora in February of 1977 (when I was 14) on a classic music station that played jazz on the weekend. I especially remember to first tune "It Happens".