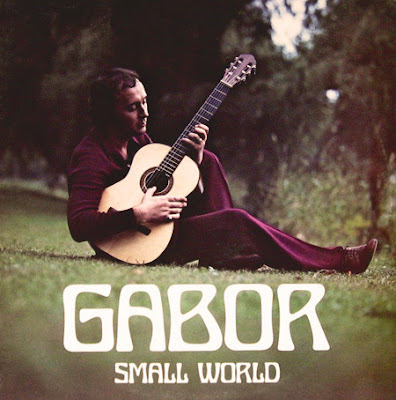 On this day fifty years ago, Hungarian guitarist Gabor Szabo wrapped up the second of two days recording Small World, the first of his two Swedish albums. The other one, Belsta River, was recorded and released there in 1978.

Small World is a small wonder. It is among the guitarist’s most intimate and personal albums. Other than a few now-dated feedback effects, it stands as one of Szabo’s most consistently interesting and well-rounded recorded performances.

Credit for this is due in no small measure to producer and Four Leaf Clover owner Lars Samuelson, who assembled the group heard here – featuring then up-and-coming guitarist Janne Schaffer – and allowed Szabo to work his magic. Indeed,

Small World casts a spell that had been missing on several previous Szabo records.

The album comes between the disappointing success of

High Contrast (Blue Thumb – 1971) and Mizrab (CTI – 1973), recorded four months later, and was issued on CD in 2001 as part of Gabor Szabo in Stockholm, which also included the aforementioned Belsta River.

Neither the album nor the CD were ever issued in the United States – which made the original album pretty hard to come by in those pre-internet days. Only hard-core fans, like yours truly, were aware this thing even existed. When I finally got my first copy of the record (in a reissue with the black and white cover) in the late eighties, it was like hearing a stunning secret no one else knew.

Small World at length some two decades ago. With a few minor reservations, most of what I said still stands – the text of which follows. The album is a marvelous detour in Szabo’s discography, well worth hearing anew. 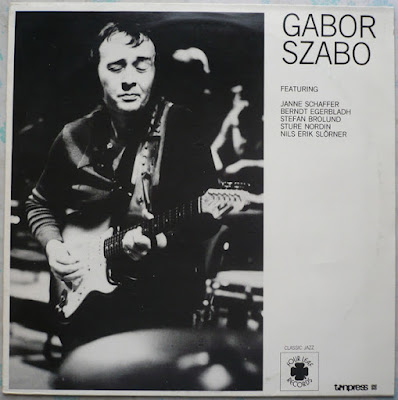 An unusual and fascinating entry in Gabor Szabo's discography, Small World is the first of two records produced in Sweden for Lars Samuelson's Four Leaf Clover Records. Aside from the guitarist's debut Hungarian recordings in 1956, the Stockholm sessions of 1972 and 1978 mark the only occasions Szabo recorded outside of the United States. Small World, like Belsta River and Femme Fatale, wasn't even released in the United States. But it is a gem of Szabo's fine musicianship and one of the guitarist's more notable achievements.

Small World is the result of Szabo's long relationship with Peter Totth (formerly Menyus Totth and also known as Peter Toth). Already conducting the radio orchestra in Hungary by 1956, Totth was also playing piano in a Hungarian trio including Gabor Szabo and bassist Louis [Lajos] Kabók before he escaped the Communist insurgence later that year. Totth went onto Sweden, where he stayed for many years. Szabo, however, went onto the United States and soon thereafter formed a group in California called the Three Strings (also featuring Kabók). Szabo, who so often formed deep, long-lasting friendships, stayed in touch with Totth. Upon a 1972 visit to Sweden the two conspired to make Small World together.

"Peter asked me if I was interested in producing a record with Gabor Szabo," says Lars Samuelson. "And I said yes. I picked the best Swedish musicians who could give Gabor inspiration. Gabor liked them very much; especially Janne Schaffer." Unlike Szabo's American producers, often designing sessions around commercial possibilities, Samuelson genuinely seemed interested in providing a beneficial environment for Szabo. Rock and fusion guitarist Schaffer was, however, chosen for commercial appeal. His own recent debut on Four Leaf Clover had gone gold and he had name recognition by that time in Sweden. But the pairing works -- though Schaffer rarely is afforded the opportunity to solo at length or interact with the leader the way Jimmy Stewart so often did. On the other hand, Schaffer is game to participate and modifies his rockish sound with a gypsy feel quite suitable for accompanying Szabo.

One imagines Small World to be exactly the kind of album Szabo liked making. His playing occupies much of the spotlight. The album is nicely recorded; capturing the guitarist in lucid, often inventive form. The music has the enchanting fervor he was often capable of stirring in performance. His associates cushion the guitarist with minimal support and occasionally he allows for inspired interaction with the other guitarist and keyboard player. (Interestingly, the bass player remembers it as just "a regular studio recording" -- but found himself intrigued by Szabo's sound.) There are no distracting string or vocal sections, no bows to popular culture and Szabo's inclusion of Rodrigo's Concerto de Aranjuez even lends an air of timelessness lacking in so many of Szabo's efforts at the time. One unfortunate drawback, though, is the guitarist seems to employ an effect in places (noticeably in "People") which gives his deep, lovely tone a sour, dated twang. 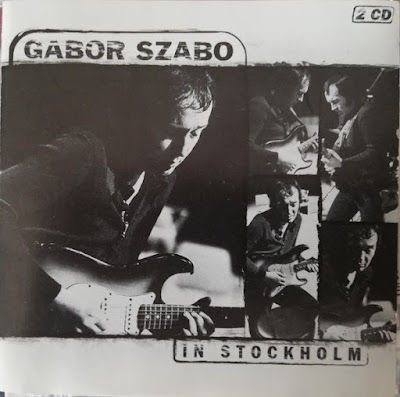 "People," a piece he'd been perfecting in performance since the mid-60s, starts things off with Szabo's jangled minor-key solo, exploring the mysterious consequences of the song, before continuing into the well-known theme. One cannot help note how expertly he excels at bypassing the song's corny sentimentality to find a genuinely warm emotion. From here, he returns the listener into a darker aspect of the tune; simply a rock riff he used for jamming (here given the title "My Kind of People") and perhaps, an expression of the inherent duality of human nature. "People/My Kind of People" is, unlike so many of the pop covers and self-penned riffs Szabo had recorded for so long, a fully developed, almost theatrical performance (appropriate, as it's taken from the 1964 Broadway hit Funny Girl). It is an exciting entrance that leads into a feature for the pure guitar artistry of Szabo's playing in "Lilac-Glen." The interaction of formality with the openness Szabo needed is probably the result of Totth's co-authorship. There is a classic, waltz-like feel to "Lilac-Glen" that, like much in the best of jazz, is not bound by chordal vamps. Szabo relishes the minimal background -- and the opportunity to interact with his own playing. Although Alicia Solari, Szabo's wife at the time, is credited as lyricist here, no lyrics are sung during the performance. A poem by Solari bearing the title "Lilac-Glen," is printed in English on the sleeve.

The record continues with the welcome return of "Mizrab," certainly one of the guitarist's very best "compositions" and unaccountably never discovered by others as "Gypsy Queen" was. Perhaps the strong Middle-Eastern influence mixed with the drone of an Indian raga scared others off. But the simple harmonics of the theme mixed with the lovely way Gabor expresses it are so unique to the guitarist that it may be best kept as Szabo's secret. This performance isn't as powerful as the one he'd record with Bob James for Creed Taylor later in the year. Szabo allows a rock rhythm to interrupt the hypnotic drone of the tune; and while the musicianship is nice, it is not nearly as engaging as Szabo showed it could be.

"Impression of My Country/Foothill Patrol" is a flight of moods and reactions to an ever-eruptive landscape. Much like a motion picture soundtrack, Szabo and company effectively paint a horizon peopled with beauty and threatened by darkness, then overpower it with 4/4 military cadenzas, slashing lines and unpredictable folly before returning to expressive moments to suggest the survival of the human spirit despite the chaos which torments it. (Although there is a danger reading this deeply into merely politically suggestive music -- Szabo's performance of "Guantanamera" in 1967 is another -- the suggestion gains significance upon studied listening). Here, after a beautiful solo introduction (here titled "Impression of My Country" and used, in part, again to kick off 1973's “Rambler”), the guitarist engages with Schaffer, then introduces the bassist in the conversation and finally when the rhythm section joins in, Egerbladh delivers a Herbie Hancock-like electric piano solo that spurs an interactive synthesis with the entire band. Though this is far from the kind of avant garde music of Sonny Sharrock or Derek Bailey (or even Charles Ellerbee or Bern Nix), it is probably as "free" as Szabo would ever get. This profound and successful piece -- probably no more than a scrapbook of Szabo riffs -- reminds one, oddly enough, of Pink Floyd's The Wall in what it strives to achieve and the impressions it leaves. Ultimately, these performances form the centerpiece and most memorable part of Small World.

Upon coming to a second waltz penned by Peter Totth, it is interesting to note that Szabo's friend does not participate as a musician on this recording. "Another Dream" is a trio performance that reminds one how infrequently Szabo was heard in a guitar/bass/drums format and how well he thrives in a strict jazz context. Szabo hadn't been recorded this effectively as a jazz soloist since Spellbinder in 1966 and during his years following Charles Lloyd's departure as a Chico Hamilton associate.

Finally, the inclusion of Joaquin Rodrigo's Concierto de Aranjuez for Guitar and Orchestra is an unusual turn for Szabo; the unschooled genius who could play the classics but seemed content to avoid them. Immortalized in 1960 by Gil Evans's brilliant arrangement for Miles Davis in Sketches of Spain (Columbia CK 40578 [CD]), Rodrigo's impressionist composition has enjoyed great popularity in jazz contexts and, ultimately seems ideal for such a natural gypsy as Gabor Szabo. The concierto was probably brought to the session by Szabo himself following a recent meeting with Bohlin, a famous Swedish guitar maker. Bohlin made a 12-string acoustic guitar especially for Szabo which the guitarist liked so much, he used it to record the brief version of Concerto de Aranjuez heard here [for purposes of review, 'concerto' is spelled as it appears on the sleeve of Four Leaf Clover (Swd) EFG7230]. Beginning "in the middle" as Evans's arrangement does, Szabo performs the Adagio in a haunting and lovely two-guitar conversation with himself. Szabo is exceptionally well-suited to the nomadic and romantic flamenco style. Miles Davis, himself a romantic haunted by Rodrigo's beautiful work, said of the concierto: "(t)hat melody is so strong that the softer you play it, the stronger it gets." Szabo's natural gypsy talents and uncanny dexterity imbue the song's Spanish outline with the sensitivity required of the performance. He even flares his dramatic muscle (evident to many of his concertgoers) when he concludes the performance on an unresolved note. As the listener awaits more, the needle quietly wends its way toward the paper label at the record's center; the gypsy having told his story.