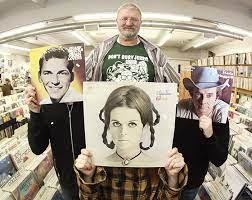 I’m sad to report that my good friend Jerry Weber passed away on Friday, January 28. He was 73. Not only was Jerry the nicest guy you’d ever want to meet, he was one of Pittsburgh’s most beloved personalities and well-known throughout the world as one of the greatest of all record sellers.

There was nothing about music Jerry didn’t know. His first love was the blues – and he had a thing for old rock and jazz too. But ask him anything about records, even if you weren’t sure of what you were asking, he’d know about it. His mind was a virtual encyclopedia of records.

While still delivering mail in the late 70s, Jerry opened up his first record store in Pittsburgh’s Oakland neighborhood. Just blocks away from the University of Pittsburgh, it wasn’t just any old record store. Jerry’s store – known then as Garbage Records – carried a huge selection of everything from rock, pop, blues and jazz to soundtracks, classical, easy and cast albums (all used). And this doesn’t count the insane quantities of 45s and 78-rpm records.

Jerry’s store wasn’t some hole-in-the-wall shop either. Records literally overflowed from the second and third floors of a storefront on Forbes Avenue. The selection was always fantastic but Jerry’s business model made you want to buy: he paid a reasonable rate for just about anything (from estates, libraries and individual sellers) and most of his records were about three of four dollars each, priced so the added tax would round it up to the even dollar amount (I remember many records priced at $2.83). It made it a lot of fun to buy – and an affordable way to try something new.

One of my first visits to Jerry’s store was after graduating high school in 1981. The earliest purchase there I can remember was Chas Jankel’s Questionnaire. It’s still a favorite of mine…and one that brings back very happy memories of that time and that place. 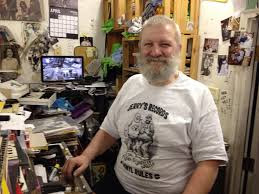 Jerry was a character and would chat with you about anything (especially sports or drinking) – but never faulted anyone for loving records (he wasn’t a big fan of CDs), even if it was one of his multiple copies of a Michael Jackson record or dozens of some easy listening record.

Every phase of music I went through in my life, Jerry conjured up the requisite records to satisfy: here was where I discovered jazz, funk, P-Funk, soundtracks, easy-listening and so much more. Thanks to Jerry, I was also able to discover and, of course, later chronicle both Gabor Szabo and Gary McFarland, among many others.

Eventually Jerry gave up his postal job and renamed the store Jerry’s Records. By 1993, Jerry relocated to the store’s current location on Murray Avenue in Pittsburgh’s wonderful Squirrel Hill neighborhood. I moved to the Washington, DC, area in the late eighties but Jerry’s was always my first stop on any return trip home (I moved back in 2015).

Jerry shared my love of records, yet he did far more for me than open my ears to new sounds. Any time I pursued a musical research project, Jerry would let me sample or borrow whatever record I needed. I usually ended up buying most of the music, but Jerry’s kindness and trust in me was something I appreciated and never took for granted.

More than once, Jerry gave me work when I needed it. But working for Jerry was never work – there was always music, Jerry, Bobby and Diane. As an employee, customer or researcher, my time at Jerry’s was always magical. Jerry made it magical.

Health issues forced Jerry to sell his store to an employee in 2017, but it was agreed that the store would still be called Jerry’s Records. Because Jerry had millions more records at his warehouse home in Swissvale, he and his son, Willy, continued selling records out of his own home.

Jerry isn’t just someone I cared deeply for. He was a beloved icon here and one respected by many throughout the world. His kindness was genuine and is unprecedented among the other record purveyors here in Pittsburgh and in far too many record stores throughout the world.

My thoughts and prayers are with Jerry’s family. And his many, many friends: Jerry took great care of his family – and even his friends. I will miss you, my friend.

Jerry Weber and Your Friendship is not ended and it continues to the memories in your heart such a Great Friendship.
Please click the link to get the highest returns on your investment.