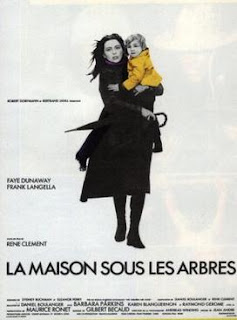 This gem may require a bit more patience than your average thriller, but its charms are plentiful and more often subtle than not. While subtlety is rarely an appetizing ingredient in a thriller dish, director René Clément (1913-96) delivers a smart, stylish and entrancing melodrama that earns its fair share of thrills and even a worthy giallo vibe.

Clément was known for such classics as Battle of the Rails (1946) and Forbidden Games (1952) and, later, the all-star flop Is Paris Burning? (1965). He also directed such better-than-average thrillers as Purple Noon (1960), with Alain Delon, Joyhouse (1964), with Delon and Jane Fonda (featuring one of Lalo Schifrin’s earliest scores), and Rider on the Rain (1970), with Charles Bronson.

The Deadly Trap (1971) features American actors Faye Dunaway, as Jill, and Frank Langella, as Philippe, together as a married couple unaccountably residing in Paris, with their two young children, Cathy and Patrick.

Philippe seems to be writing a book, escaping from a secret past as someone who apparently dabbles in “industrial espionage.” Jill is a flighty, come-what-may mother, who shares a special bond with her son – who has no past or inner life that we know of. The enigmatic Cathy seems to be more of a daddy’s girl, at least in her mind.

All is well until the children disappear. Well, not quite. Jill and Philippe are not at all happy with each other, acting likes strangers in a strange land of their own marriage. Philippe is obsessed with whatever work he does (like Donald Sutherland in Don’t Look Now) and is disturbed by Jill’s lapses of time and commitment.

Jill, who seems to overly estimate her “brilliant” husband, unaccountably doesn’t seem to want any part of a physical relationship with him (like almost no one else in a 1971 film – or anyone else attached to Frank Langella at this time). The kids get nothing but babysitters and strange vibrations from their parents. Little wonder why they are eventually – and nearly tediously – lured away from their parents.

The film is highlighted by the ever-beautiful Faye Dunaway, who gives a tremendous performance as a mother in peril. Indeed, it’s hard to imagine a better presentation of such a classic (or cliched) trope: Dunaway mixes her caught-in-the-middle Evelyn of Chinatown (1974) with the plucky Kathy of Three Days of the Condor (1975) – but as a mom, she excels.

It’s unusual to see the actor portrayed as a loving mother (one exception being the great 1988 film Burning Secret), but her scenes with young Patrick are very believable (at the expense of so many other scenes – especially those with the enigmatic daughter Cathy). Even that little apartment the family occupies is very realistic too. They move around the place like they really live there.

Clément shows us a beautiful, but decidedly un-touristy side of Paris. The film, shot by Andréas Winding, who lensed Clément’s previous Rider on the Rain and Jacques Tati’s Playtime (1967), looks beautiful: soft focuses throughout, with Dunaway looking lovely, fading into dark, hazy, almost hallucinogenic settings.

It’s unclear why this family is in Paris in the first place, but these outsiders inhabit their semi-giallo with all the baggage that comes with strangers in a strange place. This film never quite goes giallo – despite its Italian title – but it comes close. The elliptical script was written by the actor/writer Daniel Boulanger (a writer of two segments of the terrific 1967 Edgar Allan Poe omnibus film Spirits of the Dead), with the apparently uncredited Ring Lardner, Jr., who had previously scripted Robert Altman’s M.A.S.H. (1970) and was probably responsible for the convincing English dialog heard here (his credits in film noir are especially notable here).

It is a classic Hitchcockian situation, where a MacGuffin (in this case, a vague threat of “industrial espionage”) drives the action. That action, the kidnapping of the children – which the script threatens mercilessly before the film’s halfway point, when the kids finally disappear – comes, of course, from Hitchcock’s The Man Who Knew Too Much (1956).

But it’s hard to see Faye Dunaway as a helpless Hitchcock blonde or any one of the Master’s female leads (only Marnie comes close). She comes from a generation of women Hitchcock could probably not have realistically directed or, really, even properly understood.

There are, however, a number of other film classics referenced here, notably Gaslight (both 1940 and 1944 versions) and Roman Polanski’s Rosemary’s Baby (1968). These two references alone make Philippe extremely suspect. But there are also echoes of other Polanski films, from The Tenant (1976), where an aggrieved outsider must adjust to unusual customs, to Frantic (1988), where an American must navigate the unfamiliar Parisian backstreets to find a loved one.

The jolt, however, is in watching Clément’s film nearly five decades later and seeing Jill take the moral, public and legal blame for her children’s disappearance. It’s truly painful to watch. Philippe knows he’s to blame for his children’s abduction, but it is Jill who is blamed and shamed for her negligence.

The film seems to go to unusually great lengths to address the painful wrongs society does to women in general and mothers in particular. Once the kids are gone, Jill enters a Kafka nightmare that this film appropriately evokes in Wellesian images from the fantastic 1963 film adaptation of The Trial.

Philippe’s confusing involvement with “The Organization” also recalls Patricia Highsmith’s “Ripley’s Game,” which is odd as that novel wasn’t written for another three years (Wim Wenders filmed the 1974 book as The American Friend in 1977 and Liliana Cavani filmed it, beautifully again, in 2002).

It’s notable that Highsmith’s first novel, Strangers on a Train, was filmed by Hitchcock in 1951 while the novelist’s celebrated “The Talented Mr. Ripley” was first filmed by Clément in 1960 as Plein Soleil (a.k.a. Purple Noon – also with Maurice Ronet, who gets one brief scene here). It’s not inconceivable that the talented Ms. Highsmith was inspired by this film to craft her terrific (and more logically worked out) “Ripley’s Game.”

The sheer number of beautiful staircases Clément shoots here also suggests the classic woman-in-peril noir The Spiral Staircase (1946): Jill’s loving mother is “muted” here by her pre-figured criminality and her gaslighted weak and imperfect motherhood make her an absolutely perfect potential victim. She can neither satisfy her husband (!) nor successfully protect her children. Well, it is early 70s French provincial, after all. One staircase in particular here prefigures another famous staircase seen two years later in William Friedkin’s The Exorcist.

The lush orchestral score is by the renowned French singer Gilbert Bécaud (1927-2001), best known today as the writer of “What Now My Love” (covered by both Elvis Presley and Frank Sinatra), “Let it Be Me” and co-writer of Neil Diamond’s “Love on the Rocks” and “September Morn.” Bécaud’s main theme is a melodic piece that traffics appropriately in both playful childlike wistfulness and melancholy adult malaise. The tension cue that plays over the children’s abduction is an eerie Morricone-esque minimalist piece that perfectly reflects a mind on the brink.

This French film appears as though it was scripted and spoken in English. But the English dub of the film features Faye Dunaway doing her own voice. On the other hand, all of the male voices, notably Langella’s Philippe, seem to be the work of none other than Gene Wilder, who made a name for himself as Willy Wonka the same year this film was released. I have no proof of that, of course, but I don’t know how to prove or disprove this in any way. All the guys sure sound Wilder.

Oddly, this movie is known under many titles, few of which make much sense. Only the source novel’s boring title seems reasonable, “The Children Are Gone.” Not exactly thrilling, though, is it? So, how about the American title, “The Deadly Trap?” What was the trap? Phillipe’s unexplained web of whatever?

The French title, “The House by the Trees,” sounds exciting – but it only makes sense toward the very end and only for a few brief moments. Then there’s the Italian title, “The only clue: a yellow scarf,” which is, umm, true but not as exciting as something like “The Amazon with the Scarf of Fire” or something baroquely giallo like that.

Still, the film is a worthy and intoxicating European thriller. It follows a classic dream/nightmare logic that makes it a earnest contender among such kidnap classics as High and Low (1963), Séance on a Wet Afternoon (1964) and Bunny Lake is Missing (1965) and goes some way to informing the giallo classic Who Saw Her Die (1972).

There are great subtle touches here, notably Barbara Parkins’ lovely performance as the significantly named “Cyn,” the odd Michele Lourie playing the utterly inscrutable Cathy and the strange ending, where a child’s drawing is either malevolent or the happy ending that seems intended. And the feeling throughout is that no one is quite who you think they might be.

Posted by Douglas Payne at 9:33 PM