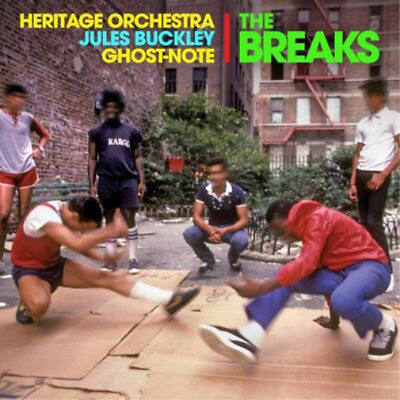 I really didn’t catch much new music in 2022. What I did hear was usually more interesting for a listen or two rather than memorable for more than a day or so. Maybe I was too busy catching up. But, in fairness, I’m always late to any party: usually, parties break up before I even show up.

One disc that did catch my attention in a big way this year was neither released in 2022 nor even issued in the United States. But it’s an arresting bit of funk jazz that deserves far more attention than it has, to my knowledge, received thus far or at all.

The disc’s cover alone is disorienting: Break dancers. What? A flip of the disc reveals this disc wasn’t issued in 1984 as it appears – reminiscent of record covers for the Beat Street and Breakin’ soundtracks or the Fuse One release Ice. The Breaks was issued nearly four decades later in 2021.

Glancing over to the label that issued this disc, we don’t find any traditional pop or jazz-label logo. The Breaks was released by the esteemed Decca label, one of Universal Music’s classical (or classical crossover) imprints. What is going on here?

One listen to The Breaks shatters all expectations: here is a disc of seventies-era “break beats” that were frequently – in some cases, often – sampled in eighties and nineties hip hop. The dazzling array of tunes – which digs in to more than a dozen full-length tunes – taps into soundtrack funk, soul, R&B, disco, pop - even a little rock (but surprisingly little jazz). 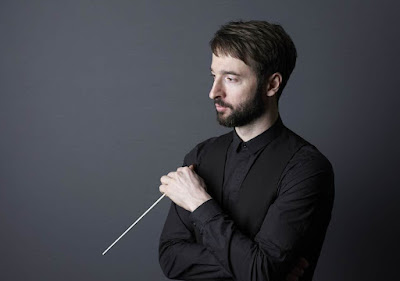 British composer and arranger Jules Buckley (b. 1980), surely one of the best young arrangers on the scene these days, has nearly no name recognition on this side of the Atlantic. No doubt this is why this disc never found its way over here. But why the conspiracy to keep this guy a secret?

Buckley has conducted the BBC Orchestra, Metropole Orkest and, as on this disc, his own Heritage Orchestra (co-founded with Chris Wheeler). He has also worked with UNKLE, José James, Anoushka Shankar and arranged and conducted the magnificent and Grammy Award-winning Snarky Puppy album Sylva (2015). (My assessment of Buckley as an arranger and collaborator comes from watching and listening to commentary of the DVD of Sylva).

In his native UK, Buckley is known for his work with DJ Pete Tong, Jonathan Jeremiah and Paul Weller (of The Jam and The Style Council).

My hope is that more American musicians discover the wealth of talent in Mr. Buckley. To me, he descends from the great arrangers Nelson Riddle, Percy Faith, James Last and Don Sebesky, all of whom perfectly marry the pop of their day with other genres (jazz, mostly) that crossover to reach listeners of the other – whichever “other” there is. 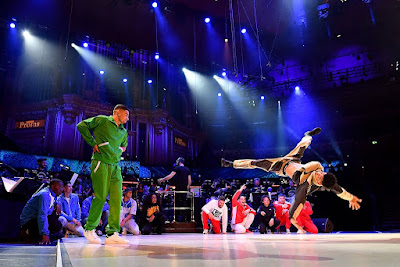 Additionally, like Duke Ellington, Gary McFarland or even Philip Glass, Buckley weds music to dance in a way that suggests his music is far more dynamic than merely one-dimensional.

The Breaks is based on the show Buckley and Wheeler staged at Royal Albert Hall on September 6, 2019, as part of the BBC Proms (the annual eight-week summer concert and event series staged in and around London). The show featured Buckley conducting the Heritage Orchestra with dancers and singer Vula Malinga and “UK turntable royalty” Mr. Switch (who both appear here).

One thing that distinguishes The Breaks from, say, those funky Percy Faith and Henry Mancini albums from the seventies (namely, Disco Party by the former and The Cop Show Themes by the latter) is its devotion to the groove. For that key ingredient Buckley enlists the brilliant drum duo Ghost-Note, with Nate Werth and Robert “Sput” Searight – both former members of Snarky Puppy – and both on Sylva. They keep this engine humming throughout.

The Breaks is fantastically engaging from beginning to end. Jules Buckley explores 15 break beats – 14 of those in full – with as much dedication to the melody as to the groove. And that one mash-up at the end is a collage of break beats that could have been longer and included even more. Here’s hoping there’s more of The Breaks to come. This is jazz funk at its finest. 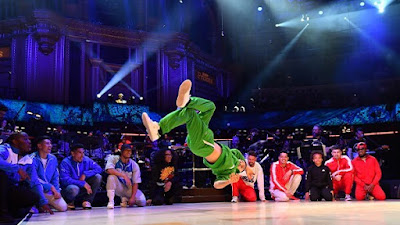 What follows is a song-by-song breakdown of the disc, just scratching (he said knowingly) the surface of the wealth of music contained in The Breaks:

1. Apache: Jerry Lordan’s “Apache” goes back to the 1960 hit by Cliff Richard’s backing band, The Shadows. Buckley’s version, however, grooves to the 1973 break-beat classic waxed by the studio group the Incredible Bongo Band, from the first of its two albums, Bongo Rock. The Incredible Bongo Band’s “Apache” has been sampled hundreds of times but its first samplers are the Sugarhill Gang’s “Apache” (1981) and Grandmaster Flash and the Furious Five’s “The Adventures of Grandmaster Flash on the Wheels of Steel” (1981).

2. It’s Just Begun: This 1970 single by the Jimmy Castor Bunch, which riffs on Kool and the Gang’s “Give it Up” (1969), has a strong Sly and the Family Stone vibe. The oft-sampled song, which gave the Jimmy Castor Bunch’s 1972 RCA album its name (and a different version of the tune), was first sampled by Grandmaster Flash and the Furious Five for “She’s Fresh” in 1982. Tenor saxophonist Kamasi Washington dials in a solo from L.A. during the height of the pandemic lockdown.

3. Hot Wheels – The Chase: The studio group Badder Than Evil – which included noted film composer Angelo Badalamenti (1937-2022), writing here as Al Elias…get it? – contributed this song to the Blaxploitation film soundtrack Gordon’s War (1973). It has a very similar groove to Lou Donaldson’s “Sassy Soul Strut,” also from 1973 – and it screams total funk circa 1973. The song was first sampled in 1987 for “Spy in the House of Love (Streetsahead Mix)” by Was (Not Was), a group featuring Don Was, the current president of Blue Note Records (the label that issued the aforementioned Lou Donaldson track). It’s gone on to greater fame from there.

4. Space Funk: The Cincinnati-based Manzel issued a couple singles in the late 70s, including “Space Funk,” their 1977 debut. This little-known gem hasn’t previously received much attention, at least not as much as the drum intro to their “Midnight Theme,” the b-side to the group’s 1979 single “Sugar Dreams.” So, kudos to Jules Buckley for his cover here. The best-known sample of “Space Funk” can be heard on Erik B. & Rakim’s 1988 “No Competition” 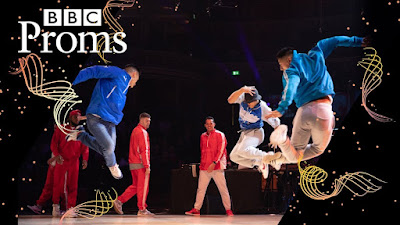 5. Think (About It): This 1972 Lyn Collins hit was written, produced and arranged by James Brown and contains a whopping five wildly popular breaks. It’s been sampled literally thousands of times by such hip-hop greats as Rob Base & DJ E-Z Rock (“It Takes Two,” which is how I first heard it), Grandmaster Flash, Kool Moe Dee, Public Enemy, Kid n Play, Snoop Dogg and Kanye West.

6. Forty Days: This little beauty is new to me. Originally known as “Fourty Days” (and also co-credited to trombonist Ray Jackson), a tune hidden on trumpeter Billy Brooks’s sole solo record, Windows of the Mind (1974) on Ray Charles’s Crossover label (Charles also co-produced). “Fourty Days” was first sampled by A Tribe Called Quest for “Luck of Lucien” (1990) and was also sampled by, among others, Greyboy for “Funk on the Brain” (1993). Buckley’s silky yet slinky “Forty Days” features a lyrically gorgeous flugelhorn solo by Gavin Broom.

8. More Bounce to the Ounce: The Dayton-area phenom Zapp’s 1979 debut single was the inspiration behind the Tom Tom Club’s 1981 hit “Genius of Love,” itself a sampled favorite. (Chris Frantz of the Tom Tom Club said that “Bounce” was “the jumping off point for us, because we loved the groove of that song, and the tempo.”) The synth-heavy talk-box vocal “Bounce” was sampled early on for George Clinton’s “Loopzilla” (1982) and has been sampled hundreds of times by, among others, the Notorious B.I.G., EPMD, LL Cool J, Ice Cube and Eminem.

9. Get on the Good Foot: James Brown’s 1972 hit is more groove than song, with Brown preaching the gospel of good funk, qué pasa people. “Good Foot” was tailor-made for sampling and indeed hundreds have sampled it, including 2 Live Crew, Big Daddy Kane, Ice Cube and even James Brown himself for “I’m Real” with Full Force in 1988. Buckley’s arrangement allows trombonist Alistar White to funk out his best Fred Wesley (who did not solo on the original studio take of the song). 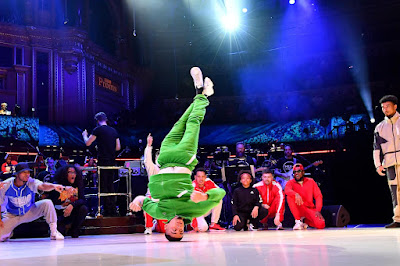 11. Dance to the Drummer’s Beat: A very happy discovery for me here, “Dance to the Drummer’s Beat” comes from the Miami-based drummer Herman Kelly. Originally featured on Herman Kelly & Life’s album Percussion Explosion, “Dance” likely didn’t become a national hit because it was neither featured on the Saturday Night Fever soundtrack nor issued by the Miami-based TK label, home of K.C. and the Sunshine Band. That didn’t stop clever hip-hop artists from finding this song: two early samplers include “Dopeman” by N.W.A. and “Beats to the Rhyme” by Run-DMC, both 1987.

12. Rated X: Before their 1979 breakout hit album Ladies’ Night New Jersey’s Kool and the Gang was one of the finest and most consistently terrific funk bands - ever. From their 1972 master jam Good Times, “Rated X” was sampled twice by both Queen Latifah (“Dance for Me” and “Queen of Royal Badness” – both 1989) and Ice Cube (“Turn Off the Radio” and “The Product” – both 1990).

13. The Mexican: One of the more unusual breaks featured here is “The Mexican,” a 1972 track from the British Prog Rock band (!) Babe Ruth’s debut album, First Base. “The Mexican” likely became a popular break due to its clever “sampling” – or quotation – of Ennio Morricone’s iconic theme to the film “For a Few Dollars More.” In any event, “The Mexican” was first sampled by Afrika Bambaataa and Soulsonic Force for the legendary “Planet Rock” (1982) and, later, by the Jungle Brothers for “On the Run” (1988) and “The Mexican” by GZA with Tom Morello (2015), among others.

14. Theme from S.W.A.T.: Barry DeVorzon’s theme to the 1975-76 ABC-TV show was made popular by the studio group Rhythm Heritage (led by Michael Omartian and Steve Barri) for their 1976 album Disco-fied. One of a number of great TV theme songs from the seventies – notably including Patrick Williams’s “Streets of San Francisco” and “Starsky and Hutch” by Tom Scott (who also factors in Rhythm Heritage) – “S.W.A.T.” was sampled by LL Cool J for “I’m Bad” (1987), Public Enemy for “Nighttrain” (1991) and a few dozen others.

15. X Breaks: This far-too brief compilation of Jules Buckley’s favored breaks cleverly champions the opening salvos of Bob James’ “Shamboozie” (1982), The Mohawks’ wildly-sampled “The Champ” (1968), Bob James’ beloved 1975 cover of Paul Simon’s “Take Me to the Mardi Gras,” the Sugarhill Gang’s 1980 hit “8th Wonder,” the 1968 James Brown-produced Marla Whitney single “Unwind Yourself,” and the aforementioned Soul Searchers’ 1972 single “We the People.” In all of two minutes and eleven seconds, too. Wow!

Posted by Douglas Payne at 6:36 PM

Great catch. On some but not all streaming services there is a fully DJ mixed version of the album, which can be easier on the ear as it avoids transitions in what would overwise be sometimes dissimilar tracks.

You are right to call out Buckley, if you know trance and house music from 1995 onwards, the Ibiza Proms with a full orchestra, usually arranged by Buckley are simple epic. The original Ibiza prom opens with Fat Boy Slim's "Right Here. Right Now", if the hairs on the back of your neck do not stand on end when you hear a full orchestra play this, "you don't know jack".

Happy Christmas, Kwanza, or what other holidays you celebrate Doug!