Lee Morgan - The Complete Live at the Lighthouse 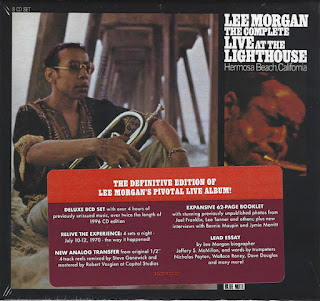 Half a century ago, the great jazz trumpeter Lee Morgan put out the only live album he’d see under his own name during his all-too short life. The legendary Live at the Lighthouse was also the only double-disc set the trumpeter would see released during his lifetime; his eponymous double-disc studio set, later titled The Last Session, was issued three months after his February 1972 death.

Morgan recorded a steady stream of consistently good-to-great studio albums during the sixties for Blue Note. Indeed, Morgan was waxing records faster than the label could release them. Many showed up on LP and CD years later – and none of them could be considered a dud or what they once called a “weak sister.”

Blue Note certainly indulged the trumpeter after his 1964 hit “The Sidewinder” reversed the label’s fortunes. “The Sidewinder” also changed the way Blue Note programmed all its releases, each kicking off with a candidly up-tempo funk tune. One could say that Lee Morgan was at this time to Blue Note as the recently-departed John Coltrane was to Impulse or Miles Davis was (at the time) to Columbia.

That Blue Note didn’t give one of jazz’s busiest, best and most popular in-person performers more live recordings seems like something of a slight. But Live at the Lighthouse goes a long way to make up for all that.

Live at the Lighthouse finds Lee Morgan at his very best, with a great band and a terrific program that, surprisingly, features few Morgan originals (or fan favorites). The spotlight is on the compositions of bandmates Bennie Maupin, Harold Mabern and Jymie Merritt.

Recorded over three days in July 1970, Lee Morgan is featured on trumpet and (interestingly) flugelhorn, and is accompanied here on a West Coast swing by an absolutely incredible group: Benny Maupin on tenor sax, flute and (not enough on) bass clarinet, Harold Mabern on piano, Jymie Merritt on bass and Mickey Roker on drums.

The original album was released in April 1971 to mostly positive reviews. Cash Box called it a “knockout,” saying “Lee has always been an exciting in-person performer and this double decker sparkles with the electricity he generates.”

The legend of the album is that, despite a double-disc offering, only four songs were issued from a weekend-long stay the Morgan quintet held at the Hermosa Beach club. Morgan and producer Francis Wolff had what Michael Cuscuna rightly calls “the unenviable task” of choosing only four tracks for LP release. Here is the detail from the original album released at the time: 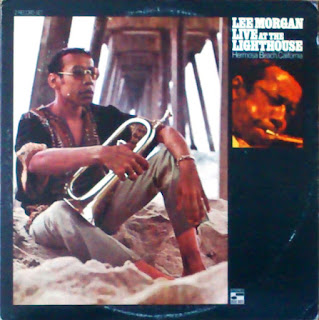 But everybody knew there was so much more. 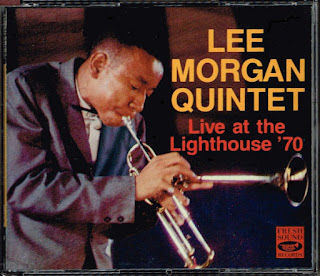 Purporting to present the complete Lighthouse sessions, the Spanish label Fresh Sound issued in 1991 a two-disc Lee Morgan set titled Live at the Lighthouse ‘70. It turns out that these recordings were radio broadcasts from the Morgan quintet taped June 16-28, 1970, at San Francisco’s Both/And club – and nothing from the Lighthouse sets at all. The Hi Hat label reissued these recordings as Lee Morgan – Both/And Club, San Francisco, 1970 in 2015.

In 1996, Cuscuna, fascinated with these recordings, tasked producers Bob Belden and David Weiss with choosing one version of each of the twelve songs performed over the course of the three-day stay. The result was the following three-disc set: 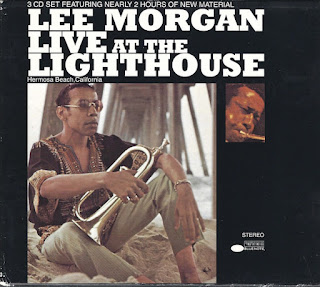 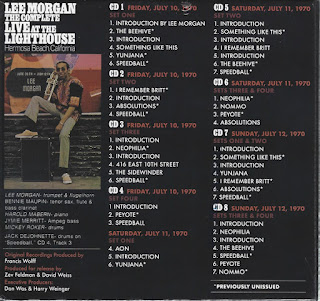 Now, we are finally blessed with The Complete Live at the Lighthouse (B0031953-02). And what a treasure-trove it is. While the program is unique and the playing is exceptional, it is amazing all of the original tape recordings have survived. Kudos to Blue Note president Don Was - who calls Morgan "the greatest trumpeter to come along since Clifford Brown and, to this day, ranks among the titans of the instrument" - and producers Zev Feldman and David Weiss for making all of this material available for the first time ever.

Morgan’s “Speedball” (a.k.a. “Speed Ball”), which served as the band’s theme (recorded in 1965 with Harold Mabern in tow), and “The Sidewinder” are, of course, featured here. But neither of these tunes are the focus of the program.

Harold Mabern contributes three compositions to the program, including the bracing “The Beehive.” Named for the Chicago club the pianist first caught Charlie Parker in 1955, “The Beehive” also factored on Mabern’s posthumously-released Mabern Plays Mabern (2020). Mabern’s memorably melancholy “I Remember Britt” – also performed by Mabern on record with Walt Bolden (1978) and Eric Alexander (1998) – rivals another distinctive composition, “Aon” (for “as of now”). “Aon” was also on Mabern’s second album as a leader, the 1968 recording Rakin’ and Scrapin, though it dates back to Mabern’s MJT+3 days.

The bulk of the originals, however, come from Bennie Maupin, who contributes “Something Like This,” “Yunjana” (a.k.a. “Yunjanna” and “Yunyanna”), “416 East 10th Street” and the wonderful “Neophilia” (which Maupin recorded several months earlier with Jack DeJohnette on the drummer’s Have You Heard? album and again years later on his own Penumbra).

According to Michael Cuscuna, producer Francis Wolff was so struck by Maupin’s compositions that he wanted the reed player to record for Blue Note. Unfortunately, Wolff passed away before anything could come of it. Bennie Maupin soon thereafter became part of Herbie Hancock’s Mwandishi (and Headhunters) band, eventually releasing his first solo record, The Jewel in the Lotus, on ECM in 1974.

While I have a long history of buying box sets I never listen to, Live at the Lighthouse has great merit and long-standing listening appeal. This is a great group, working well to make magic each of the twelve sets over three nights captured here (one of which was Lee Morgan’s 32nd birthday).

At this writing, only Bennie Maupin is still with us. Most others have left us now: producer Francis Wolff died in 1971 (shortly before the release of this album), Lee Morgan in 1972, Mickey Roker in 2017, Harold Mabern in 2019 and Jymie Merritt in 2020. Documents like The Complete Live at the Lighthouse keep the magic of great music alive – and are true gifts to those of us who marvel at any of these musicians, particularly the late, great Lee Morgan.