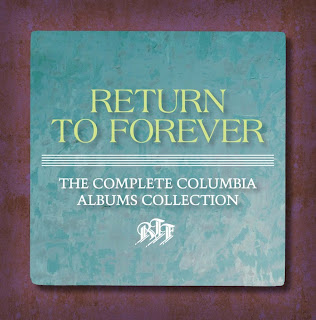 After a prodigious session career in the 1960s, several solo albums that toyed with both the traditional and freer forms of jazz and a mercurial period of experimentation with Miles Davis between 1968 and 1972, pianist and composer Chick Corea crystalized the notion of his first “group” endeavor, to be known as Return to Forever.

Corea recorded his blueprint for the concept with his tremendous Return to Forever album for ECM Records in February 1972. The album collected the talents of reed player Joe Farrell (1937-86), who featured on the pianist’s 1967 Tones For Joan’s Bones (Corea is also heard on Farrell’s first two CTI records, Joe Farrell Quartet and, brilliantly, on Outback), young up and coming electric bassist Stanley Clarke, percussionist and former Miles mate Airto Moreira and Airto’s wife, Flora Purim, on vocals and percussion. and yielded three near standards in Corea’s “Crystal Silence,” “What Game Shall We Play Today” and “La Fiesta.”

The following month, Corea, Clarke and Moreira backed Stan Getz for the saxophonist’s terrific album Captain Marvel, which wasn’t issued until 1975, and then all five of the Return to Forever musicians collected (with others) to wax Airto’s CTI classic Free. Corea, Clarke, Farrell, Moreira and Purim finally reconvened in October 1972 to record Return to Forever’s Polydor debut, Light as a Feather, which includes Corea’s now standard “Spain.”

Airto and Flora left shortly thereafter to form their own group, Fingers, as did Joe Farrell, who formed his own quartet. Guitarist Bill Connors, drummer Steve Gadd and percussionist Mingo Lewis were added to the group, but Gadd’s studio duties prevented him from staying. By the time of the group’s second album, Hymn of the Seventh Galaxy (featuring Corea’s well-known “Señor Mouse”), Corea, Connors and Clarke were joined by drummer and percussionist Lenny White.

Tired of touring and the required adherence to his electric instrument, Bill Connors left the group and was replaced by recent Berklee School of Music alum Al Di Meola. The Corea/Di Meola/Clarke/White configuration then recorded 1974’s Where Have I Known You Before and 1975’s No Mystery for Polydor.

In 1976, Chick Corea took Return to Forever to the mighty Columbia Records label, where the group waxed only three releases in an 18-month period. One of these recordings is the group’s most significant recording and yet another represents one of the group’s best recorded performances. One is an under-appreciated gem that deserves more appreciation.

The set is packaged in a handsome, sturdy box that fits easily on most CD shelves with each individual album packaged in replica mini LP sleeves, reproducing the original record’s exact graphics, and a 27-page booklet with complete discographical information, photos and new liner notes by Chick Corea and musician/historian/producer Bob Belden. It’s a treasure trove of music, immaculately packaged and beautifully presented, well worth reconsidering for the surprisingly timeless surplus of artistry it contains. 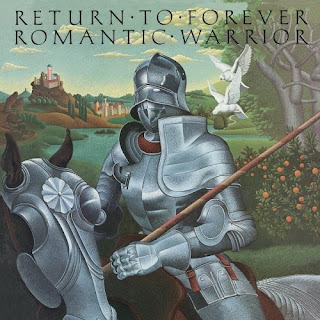 Romantic Warrior (1976): After four albums on Polydor, Chick Corea’s Return to Forever moved to Columbia Records, even though Corea the solo artist remained with Polydor for the better part of the decade. Columbia was home to other fusion leaders of the day like Miles Davis, Weather Report, John McLaughlin’s Mahavishnu Orchestra and Herbie Hancock. Note here that all, including Corea, were connected to the trumpeter’s electric phase. Little wonder that Columbia should have named their reissue line “Legacy.” And this is just the jazz fusion portion of Columbia’s holdings.

In February 1976, Corea and company headed to Chicago producer James Guercio’s popular and isolated Caribou Ranch in a remote part of Colorado to wax what was to become the group’s definitive musical statement, Romantic Warrior. Without a doubt, the album is the pinnacle of the group’s creative and artistic vision. It’s a fusion classic and, coming out of 1976, surely one of the music’s final highlights. Placing their musical topography somewhere in the middle ages, RTF rethinks its strategy to be more large scale and consciously more musical; an electrically-charged Ellingtonian statement that is like a soundtrack for a non-existent film or an electronic symphony for a post-jazz age.

Romantic Warrior has been rightly available in one form or another almost consistently since its original 1976 release and, in addition to its inclusion on Return to Forever – The Complete Columbia Albums Collection, can also be heard in its entirety on the 2008 Concord set Return to Forever – The Anthology. No matter where it appears, it’s important music well worth hearing. 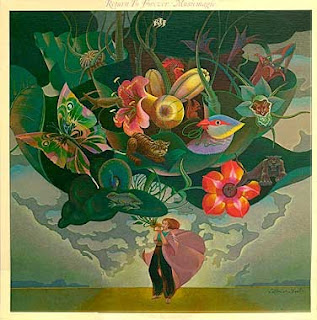 Musicmagic (1977): This surprising turnabout must have surprised many Return to Forever fans in 1977, even those Chick Corea fans willing to follow the bandleader down just about any long and unyieldingly winding path. Long derided and dismissed altogether by even the most devoted Return to Forever fan, Musicmagic really has much musical magic to offer, even if it isn’t served up like previous RTF albums.

The sound is remarkably more orchestral than anything the group had previously done, with a heavy dose of vocal leads and vamps that veer dangerously close to pop territories and, most surprisingly, solos on primarily acoustic instruments. It’s as vexing as it is bewitching and probably the intention all along.

Again recorded at the Caribou Ranch in Colorado in January and February 1977, Musicmagic seems to celebrate the pure joy of music with contributions from Corea (“The Musician”), Moran (the existential jazz ballad “Do You Ever”), Corea and Moran together (“Musicmagic,” and the most typically RTF-sounding piece here, “The Endless Night”) and Clarke (“Hello Again” and the album’s single greatest moment, “So Long Mickey Mouse,” offering particularly great spots for Farrell’s flute and soprano, Corea’s keyboard kaleidoscope and Clarke’s entrancing bass-ics).

Adventurous and enjoyable as it is, Musicmagic seemed to suggest that the Return to Forever concept had effectively run its course. The ever restless Corea was probably bored with the whole thing at this point, either not coming properly to terms with his new RTF experiment or looking forward to other challenges altogether. This particular musical model was fascinating and new in 1972, when RTF waxed its first album, Light as a Feather, but after 1976’s masterful Romantic Warrior, there was only one direction left for the group.

A monumental, but little-known, live album followed and shortly thereafter, Corea disbanded the group. Not too long after this, Chick Corea abandoned electric keyboards altogether. Corea reunited with Clarke, White and guitarist Al Di Meola for one song (“Compadres”) on Corea’s 1983 album Touchstone.

Then, many years later in 2008, Chick Corea, Stanley Clarke and Lenny White came back together for a RTF reunion tour and in June 2011 issued a double-disc set of acoustic studio tracks and electric live tracks (with guests, including former RTF members) on Concord called Forever under the suspiciously non-RTF moniker of “Corea, Clarke & White.”

Originally issued in March 1977, Musicmagic quickly disappeared before finding its way onto a limited-run, long out-of-print CD in 1990. Its inclusion in Return to Forever – The Complete Columbia Albums Collection is the album’s first domestic CD release in over two decades and a most welcome “return” it is. 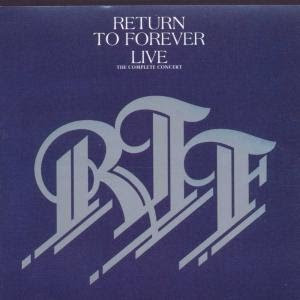 Return to Forever Live – The Complete Concert (1978): This is effectively the final Return to Forever album released and, perhaps, one of its most significant. It was recorded live at the Palladium in New York City on May 20 and 21, 1977, as part of the Musicmagic tour, which led the group to meet President Jimmy Carter the following month.

Needless to say, there is a plethora of fantastic playing to be heard here that RTF’s studio albums probably prohibited, with inventive interjections from almost all concerned, waxing eloquently over some very long passages that are sufficiently more worthwhile than their studio counterparts. 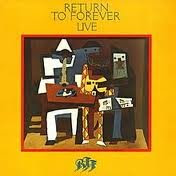 Return to Forever Live has an unusually peculiar history, though. It was originally issued as single LP release (Columbia JC 35281) in late summer 1978, with a cover featuring Picasso's “Three Musicians” and the following line up:

For some strange reason, a greatly expanded version of the album was released in October 1978 on four full LPs in a generic-looking box set as Return to Forever Live - The Complete Concert (Columbia C4X 35350), showcasing two and a half hours of music recorded over two nights. The four-disc version of the concerts contains the entirety of pieces that had been edited down for the original single LP release, many additional pieces and lengthy spoken introductions. 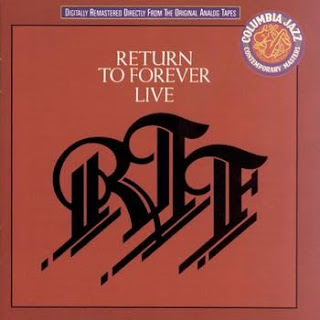 A two-CD version of Return to Forever Live was issued by Columbia’s reissue imprint, Legacy, in 1990 with several strange edits to be found. Missing are four of the spoken introductions, while “Chick’s Piano Solo” (featured on the single LP) and “Spanish Fantasy” are rolled into one long marathon performance and, strangely, “The Musician” and “So Long Mickey Mouse” get their original single LP edits rather than a full airing – probably to fit the program on to two CDs. A Japanese release over three CDs in 2000 changed the color of the cover from red to blue and restored all the music heard on the original four-LP box set. This is the version of the recording included within The Complete Columbia Albums Collection.

While there’s little argument for including the rather lengthy spoken introductions, it is fair to say that Return to Forever Live – The Complete Concert makes The Complete Columbia Albums Collection box set an indispensible part of any Chick Corea or Stanley Clarke collection (I would count Joe Farrell in there too) and worth every penny for the magisterial music and its gloriously loving presentation here.
Posted by Douglas Payne at 1:59 AM

Thank you for this excellent overview. I note that you don't mention the considerable divide that separates the first two RTF records, "Return to Forever" and "Light As A Feather," from the later ones. The first two had an acoustic sound despite Corea's Fender Rhodes--no bass guitar, no synthesizers, no guitar, and, with Airto and Flora Purim, a lilting, infectious and lightly swinging feel that was much different from the fusion band that followed. The Columbia years were such a contrast to the ECM and Polydor releases that you're really talking about different bands entirely.

Bought the new box and it is fantastic. I'm curious as to why there are almost no photos of this group on tour (apart from the box set booklet) and no bootlegs though the band toured for three months in 1977.

The dresses of this Dolce & Gabbana Sunglasses are manufactured with the best quality fabric. They are comfortable enough to wear, are highly sophisticated and help a lot in Abercrombie Fitch Outletflattering others.Vibram Five Fingers Shoes If you want to enhance your beauty, style and feminine look, then nothing can be better than these Franklin and Marshall hoodies. They are meant to be suitable for the delicacy and elegancy of women.Louis Vuitton On Sale

It is very nice article on that topic. I was looking for something like which is interesting and knowledgeable. Do you know that Agrawal Construction Company has the most amazing townships, especially best builders in bhopal, with the name Sagar Green Hills. It is located in the lap of nature.

Thanks for the useful information and it helps a lot.
Residential Plots in Hyderabad.
Top real estate company in Hyderabad.